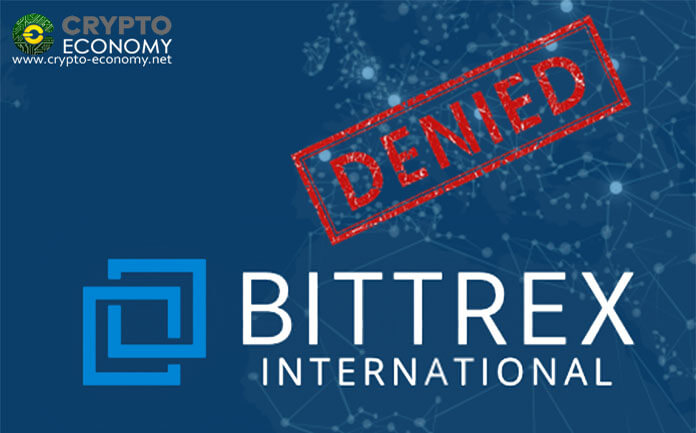 A day after the New York Department of Financial Services (NYDFS) granted the highly coveted BitLicense to European-based cryptocurrency exchange Bitstamp to officially set up shop in the state of New York, the same department has rejected the application of Bitstamp counterpart Bittrex which is headquartered in Seattle, Washington.

Following a three-year consideration process, the NYDFS gave an unequivocal response in a letter to the Bittrex CEO Bill Shihara dated April 10th, 2019. In the letter, the NYDFS cites grossly incompetent due intelligence procedures as the reason for denial of the license.

“Bittrex’s customer identification program, know your customer, and customer due diligence are seriously deficient as evidenced by the findings of the Department’s examiners during their review of sample transactions,” the letter read.

In the letter, the department lists four areas that the exchange had deficiencies of which it explicitly pointed out to the exchange to correct. These include;

The department tried to work with Bittrex in addressing these “continued deficiencies and to assist [it] in developing appropriate controls and compliance programs commensurate with the evolving nature of the sector.”

As of February 2019, the department felt that there were some issues that were still unresolved and it sent a team of officers to visit the exchange’s offices to perform onsite reviews, part of which included reviewing the exchange’s transactions between the dates January 1st, 2017 and December 31st, 2018.

This review revealed further deficiencies in the exchange’s due diligence process. Some traders even used fake names such as Donald Duck and Elvis Presley and other “clearly false names.” The token listing process also proved deficient as more than 15 tokens already listed on the platform do not comply with Bittrex’s own listing requirements.

Due to these and several other reasons, the department opted to deny Bittrex’s application for a virtual license (i.e., BitLicense) and further withdrew its “safe harbor” permit. Bittrex is thus required to cease operations in New York effective April 11th and should report back to the department in 14 days to confirm that they had indeed closed shop.