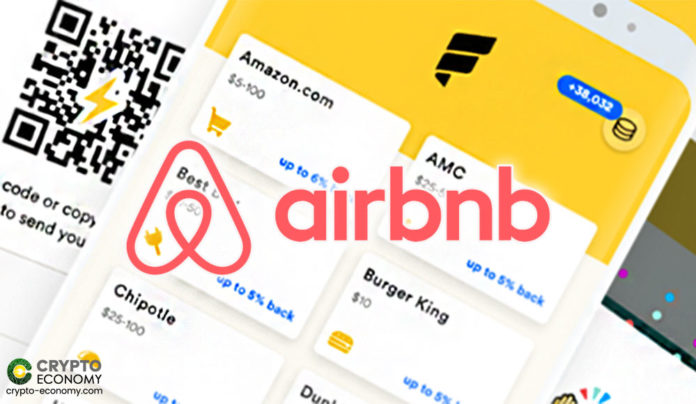 As a growing firm Fold app has always been reinventing itself by upgrading its platform to attract more users and provide more services. After working on its platform upgrade just recently and spending $2.5 million, Fold has unveiled its new service to the public by enrolling Airbnb platform to its Fold Kickbacks program. The latter means Airbnb customers can now make their bookings via Fold app, but that’s not all.

Through Fold Kickbacks Program, users can now make their bookings at the comfort of their homes and also take advantage of the 3% cashback on all their spending paid via Bitcoin. Further on, through making their payments via Bitcoin, there is also another offer available for users. Fold app is giving users gift cards worth $200 and $25 depending on your spending you can be awarded any of the gift cards.

Program Only Available in Selected Regions

While the above goodies are available to all customers, just like in the case of the other clientele of Fold only users in Canada, Australia, the United Kingdom, Ireland, Mexico and the United States can use the enjoy the added services above. However, for the rest of the world, Fold is working on making its services available, and it will start with Europe.

Although Fold is a pioneer when it comes to facilitating Bitcoin transactions, its area of business has attracted more firms leading to Fold getting competitors. Some of its main competitors are Amaten and Lolli. The latter is based in the US and teamed up with Petco, a US-based pet retailer and Safeway an American grocery chain store. In the case of Lolli, the firm is offering a $3.5 cashback reward to all of its users.

On the other hand, Amaten is a significant gift card platform that’s present in the Japanese market and has partnered with Aelf, a well-known blockchain provider network in Japan. As the oldest Bitcoin shopping reward scheme, getting competitors is good for business since it will lead to more innovations.

However, for Fold, it’s offering more than rewards. Through its platform, users can pay for goods or services via fiat currency or Bitcoin in online shops and in-stores. The latter is giving users more options.