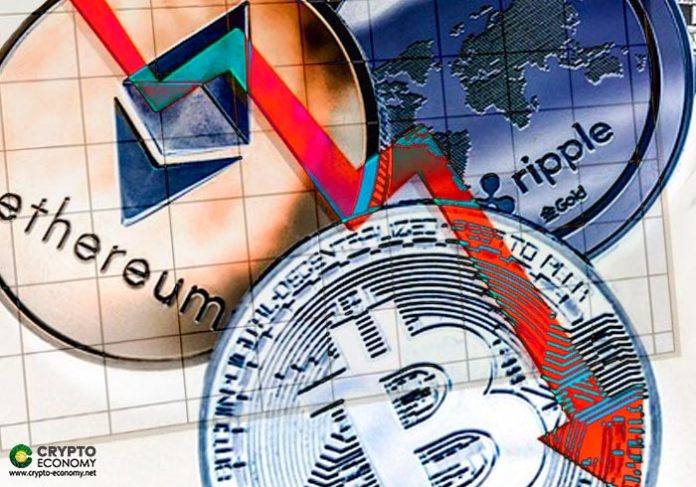 The cryptocurrency markets are in the red once more as most coins in the top 20 list by market cap are registering percentage losses in the double-digits following a bitcoin bear capitulation on Sunday evening that proceeded well into the wee hours of Monday morning July 15th.

Bitcoin has lost more than $1,400 in the last 24 hours, a marked 12.5% drop between its intraday high and low. The price of the flagship cryptocurrency fell below $10,000 mark again reaching a two-week low of $9,855 on popular Luxemburg cryptocurrency exchange Bitstamp. Bitcoin has regained about $300 since its Monday morning low and is now trading for $10,173 as of press time.

The altcoin market has been fairing worse than bitcoin as some major coins such as Bitcoin SV are seeing percentage loses as high as 21% in the last day. Ethereum classic, Bitcoin Cash and leading altcoin Ethereum all are seeing drops of more than 15% with the rest ranging between 10 and 15%.

Ethereum, which is down about 16.7% is trading against the US Dollar at $223 while Ripple’s XRP, the second largest altcoin network follows with more modest losses of about 6% to trade at $0.31. XRP is still trailing Ethereum with a $10 billion gap despite the larger losses experienced by ETH.

Bitcoin is down about 29% from its yearly highs of $13,880 seen on June 26th. The BTC price corrected sharply after a failed attempt to breach the previous year to date highs on July 10th rising to $13,200 on Bitstamp. The correction has been attributed to the negative sentiments shared by US Federal Reserve chief Jerome Powell who was testifying on Thursday in front of the Congress.

Powell gave a stern warning against both Bitcoin and Facebook’s proposed Libra cryptocurrency saying nobody really uses Bitcoin for payments but rather as a speculative asset similar to gold. In regard to the Libra, he cautioned that the stablecoin is capable of disrupting the system too much too fast and recommended to stop the project until the necessary regulatory structure is in place as well as the regulator’s concerns addressed.

On Friday, US President Donald Trump wrote a series of tweets against both Bitcoin and Libra saying he is “not a fan of Bitcoin and other cryptocurrencies” that are not real money and have no real value. It was the first time Trump had expressed his views on bitcoin publicly and the news made headlines for the better part of the weekend which could have led to the continual decline of the bitcoin price over the weekend.

The overall cryptocurrency market has lost about $37 billion over the last day, representing a 12% correction. The market cap fell to a two-week low of $269.9 billion on Monday morning at 02:00 AM (UTC) according to data shared by Coinmarketcap. It currently stands at $279.8 billion. Bitcoin market dominance has seen a negligible fall from an intraday high of 66.02% to the current 65.81% as of press time.