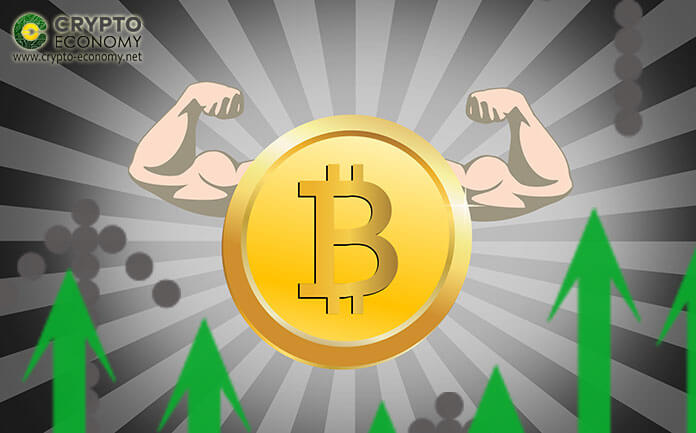 The price of Bitcoin sped past the $7,000 level in the early hours of Sunday morning, continuing the uptrend that has been building up since the start of April. The price rose to an intraday high of $7,474 on data website Coinmarketcap (even surpassing the $7,500 levels on some exchanges).

The price represents a year-to-date high and levels that were previously seen on August 2nd, 2018, a nine month high. The price has been on a slow uptrend following the bottoming of the 2018 bear market that saw the rice of Bitcoin fall to $3,200 levels in mid-December. Now following the Sunday price surge, the value of Bitcoin is up more than 130% since its December lows.

The prices, however, did not hold above $7,000 for too long as a few hours later they corrected back to sub $6,800. The intraday low prices were around $6,833 according to Coinmarketcap. The Bitcoin market cap incidentally rose to a high of $132.26 billion representing a market dominance of more than 59% of the total digital assets market capitalization – a 17-month high.

This shows that the general altcoin market may be lagging the recent Bitcoin price rally. That, however, may not be true for too long as several other altcoins registered double-digit gains on Sunday, with bitcoin cash [BCH] marking the largest price gain among the top 20 coins by market cap. Litecoin, EOS, XRP and Binance Coin saw price gains in the single-digit range between 6% and 9%.

Among notable altcoin price rises is Ethereum, the second largest network by market value. Ethereum saw a price rise to $203 marking a 150% rise from its 2018 lows in December. It’s market cap also rose to a six-month high of $21.5 billion. The price also corrected similarly to Bitcoin’s at an intraday low of $184. As of press time, the price is $188 with a 24hr trade volume of above $9 billion.

Coinmarketcap reported Sunday’s Bitcoin trade volumes from the 24hr timeframe to be in excess of $29.33 billion. However, the “Real 10” trade volume for Bitcoin, which is the figure of reported trade volume from exchanges identified by BitWise Asset Management to be reporting honest figures, stood at $1.87 billion by the end of Sunday according to data aggregator Messari.io.