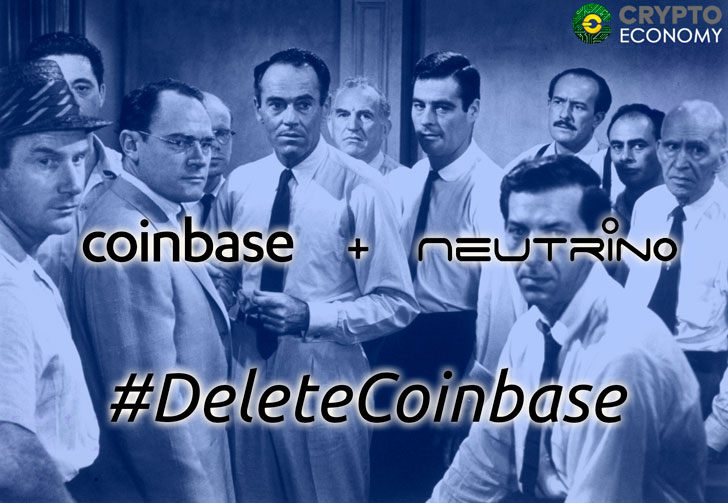 Following a controversial acquisition of the blockchain analytics startup Neutrino by leading American cryptocurrency exchange Coinbase, its users began deleting their accounts through the rallying cry #deletecoinbase on Twitter. According to these users, the acquisition of Neutrino signifies that the company condones questionable operation policies that could be going against the very beliefs by which most blockchain enthusiasts live including breach of privacy and security. The founders and C-suite of Neutrino, CEO Giancarlo Russo, CTO Alberto Ornaghi, and CRO Marco Valleri, have previously been engaged in developing software for various governments that was used to violate individual rights such as breach of privacy and to some extent even right to life.

In their previous outfit, according to a report by the Washington Post, the three executives all worked in a company named Hacking Team which developed spyware for the Saudi Arabia government. According to the report, the enforcement group that utilized the software used it allegedly to track and murder dissident journalist Jamal Khashoggi. Additionally, Motherboard has reported previously that the Hacking Team has worked with the Ethiopian and UAE governments to create surveillance systems through which these governments have surveilled and arrested several journalists.

It is not too hard to imagine that the Hacking Team’s latest outfit, the Neutrino startup that Coinbase just acquired has been built to spy on the blockchain. Therefore most proponents of the blockchain revolution have banded together to create the #deletecoinbase movement on Twitter. However, some users have been receiving error messages as they try to delete their accounts. Evidently, Coinbase does not allow anyone to close to close their accounts if they still have any amount of cryptocurrency of fiat in their wallets.

Independent software coder and Bitcoin enthusiast, Udi Wertheimer introduced an ingenious method to get rid of ‘dust’ (i.e., infinitesimal amounts of crypto). Through a Lightning Network’s Lighting Torch inspired technique, Coinbase users with dust could send their dust to other Coinbase accounts thus enabling them to delete their accounts. These users would add on their dust to the sums that they receive and send it to the next person on Twitter that requests to receive the funds by posting their Coinbase email. Udi created a hashtag #deletecoinbaseTrustChain to complement this #deletecoinbase campaign for those with dust in their accounts and are unable to delete their accounts.

It’s hard to tell how successful the campaign has become and whether the efforts are making a sizable dent to the user number of Coinbase which currently stands at 13 million. In its defense, Coinbase claims that it does not condone hacking practices, however, its decision to acquire Neutrino was based on the idea that the startup is developing a highly innovative technology that Coinbase could not afford to miss out on.

0
Crypto has quickly become a favored method for depositing and withdrawing funds at online casinos. Clients are drawn to the exchange service due to...
Read more
Companies

0
Binance has announced a new initiative, Objective Moon, to support the development of the blockchain and cryptocurrency ecosystem in France and Europe.
Read more
- Advertisment -