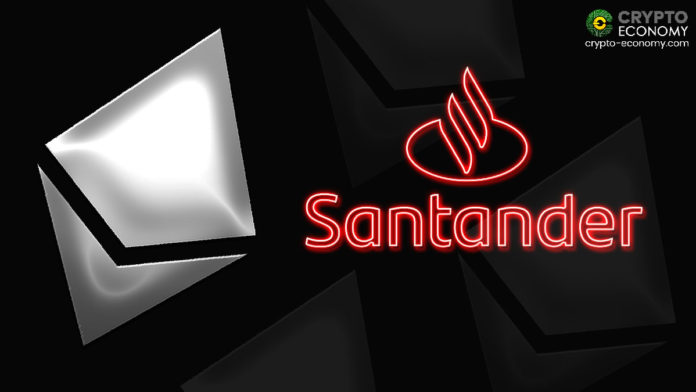 Spanish banking giant, Banco Santander has redeemed a bond security it issued back on September 10th based on the public Ethereum blockchain.

In a tweet by John Whelan, who is the head of Digital Investment Banking at Santander on Tuesday, he wrote that,

“We just performed an early redemption of our blockchain-based bond that we issued on September 10th, 2019. This unequivocally proves that debt security can be managed through its full lifecycle on a blockchain (public in this case).”

Mr. Whelan is also the chair of the Enterprise Ethereum Alliance board. In his announcement, on Tuesday, Whelan provided the transaction evidence for the issuance and redemption of the bond on the Ethereum blockchain. The bank was both the issuer and investor of the bond as this was a test of the issuance of a security on a public blockchain.

Back in September when the bank announced its experiment, it claimed that it was undertaking a first across the world but then the World Bank and Societe Generale have already issued their versions of tokenized bonds. However, Santander’s bond offering differs slightly from the other two because unlike the other offerings, Santander apparently automated the whole issuance and redemption process.

“It’s an evolutionary step,” Whelan said in September. “There are no secondary markets yet, but we are on that path.”

Santander’s bond was worth $20 million of NTN tokens that represented the bond. Each NTN token was worth $200,000 and attracted interest of 1.98% per annum translating to about $396,000 annual interest. However, the experiment only ran for 90 days and its accumulative interest was $99,000 which was also paid up in the bond redemption as shown here.

As an experiment, the bond investment payment was not made in real dollars but instead, Santander, which was both the issuer and investor gave itself a new digital currency dubbed SUSD which expectedly stands for Santander USD. The SUSD was then traded for the 100 NTN tokens that represented the bond. After the redemption, the issuer will then receive the NTN tokens back and give out the previous SUSD tokens with the interest rate added then burn the NTN tokens given back.

The process may seem simple but it is a step forward in the securities issuance field and as Whelan put it, it is conclusive proof that debt securities can be managed fully on the blockchain.