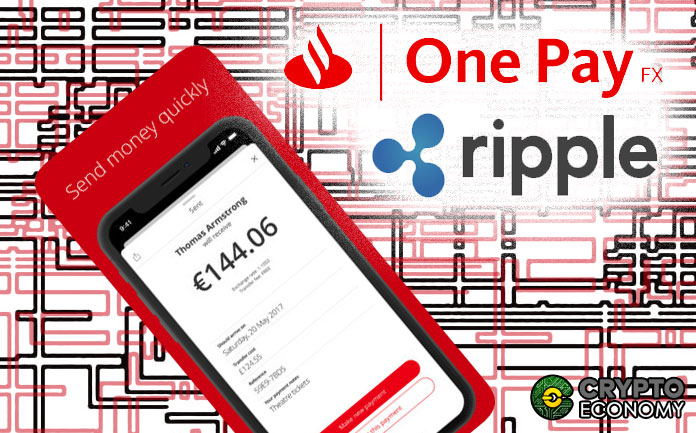 RippleNet has been integrated with OnePay FX which is a mobile application developed by the banking giant Banco Santander.

XRP, to improve the lives of customers

Santander seems to have been impressed with the transparency and speed of the blockchain-based solution which has been praised for its cross-border remittance service.

Santander Head of Innovation, Ed Metzger said at Ripple Swell that to improve the services to customers, Santander integrated with the RippleNet which utilizes XRP.

According to Metzger:“We believe that financial services are moving to a world of open platforms where companies collaborate to deliver excellent customer service for their customers, and that’s at the core of what we’re doing with OnePay FX.”

The essence of the integration is ensuring that Banco Santander’s customers can send and receive funds with ease, Metzger explained.

He added: “One of our customers was in Italy on holiday and parked in the wrong place. He needed to pay a fine and didn’t have his banking card. He was able to use the app to immediately pay the fine and stop his car from being towed away. It’s four or five clicks to do something that would have taken an awful, awful long time in the past”

OnePay FX application is available to the customers in UK, Spain, Brazil, and Poland for now. The company aims to expand to more countries in Europe, South America, and Asia.

“People don’t have to plan ahead. They can send an international payment when they need to. That’s really powerful,” said Metzger.

Blockchain-based liquidity solutions used by Ripple allows users to send and receive international payments with ease in a service that  takes days or even weeks if made by traditional bank wire.

OnePay FX with the integration of RippleNet allows the first usage of real-world XRP at such level. Santander will now be relying on the Ripple for all its cross-boundary transaction processes.

What impact will Japan and South Korea face with the Santander – Ripple partnership?

Ripple Labs have led pilot tests of its liquidity solutions with some of the leading banks in South Korea. This was led by SBI Ripple Asia, an association of over dozens of Japanese banks. Two of the largest commercial companies, Woori Bank and Shinhan Bank have already released their plans to integrate Ripple by 2019.

Japan and South Korea have continued to shown interest in this Ripple.

“Too many companies have a peanut butter problem. They’ve spread themselves very thin, working on lots of different initiatives. By contrast, Ripple has gone deep in understanding how global payments problem can be addressed with blockchain technology and digital assets.”