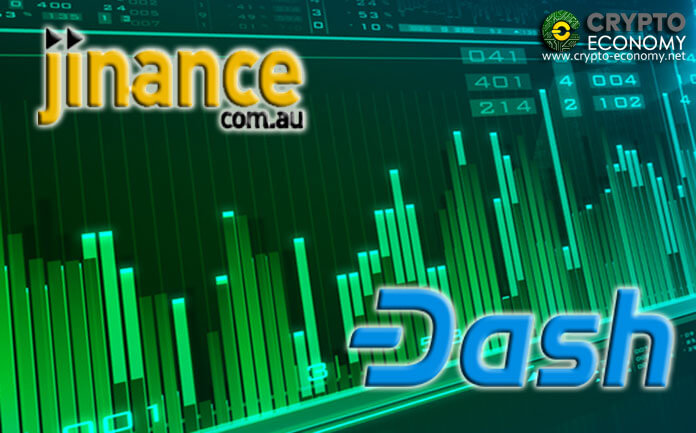 The announcement was made on Wednesday, April 10th, 2019 through Jinance’s Twitter page where it wrote

“We are excited to announce our new partnership with @Dashpay, providing Dash/AUD fiat pairs in Australia. With the integration of Dash and “InstantSend” technology on Jinance Australia, you can now trade #Dash directly with the Australian Dollars.”

Founded in 2017, Jinance, which was previously named String Exchange, is regulated by the Australian AUSTRAC government agency. Jinance later launched its platform in September 2018. This latest listing of Dash will enable several traders that look for arbitrage opportunities between exchanges to take advantage of the fast confirmation feature.

Several other platforms with Dash support have not enabled the InstantSend feature which means that traders have to wait for chain confirmations before spending their coins. Jinance Founder and CEO, Jin Chen feels that innovations such as InstantSend will push exchanges to become more efficient as they compete with one another.

He said that “At Jinance, we believe that helping people to simply and easily access and enter the cryptocurrency realm is the most effective and practical way to spread knowledge about blockchain industry and realize its powerful potential, and Jinance is a hub designed to do just that and more. We are happy to see more innovations such as Dash’s InstantSend that further promote transaction efficiency.”

Ryan Taylor, the Dash Core Group CEO expressed his enthusiasm upon the news being made public by both Dash and Jinance. He said that:

“Listing on Jinance with InstantSend is a big win for Dash and our Australian users, as we continue to extend that technology into new markets globally. Australia has emerged as an influential market for the cryptocurrency space, which is why we’re delighted to be able to offer an easier way for the country’s crypto community to buy and sell Dash using local currency.”

Taylor also added that “We hope to continue our momentum of partnering with leading exchanges and expanding our InstantSend acceptance to allow users to experience Dash’s speed and convenience.”

Alexis Von Loh
Alexis is the Chief Editor of Crypto Economy, is responsible for reviewing articles, training new editors and implementing new strategies to the editorial team. She arrived in the world of cryptocurrencies in January 2017 and since then has not stopped training and studying about the sector, blockchain and the new projects that appear.
Technology

0
CBDCs are on the rise all over the world, and Australia doesn’t want to fall back. The government and important financial organizations are trying...
Read more
CryptoCurrency News