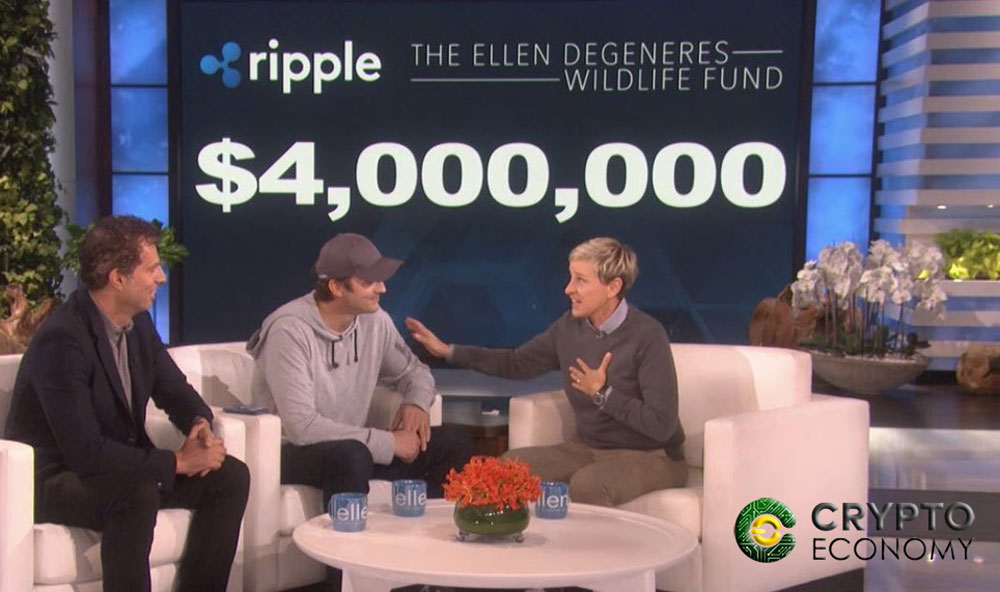 Kutcher, friend and regular participant in Ellen’s show, went to the stage alongside his partner Guy Oseary, to talk about his most recent project on Ripple platform, leaving the charismatic host stunned, by making a donation to the ‘Ellen DeGeneres Wildlife’ Fund live, for the equivalent to US $ 4 million in Ripple (XRP), the third largest cryptocurrency worldwide, according to a report from CNBC.

“You’re always thinking about everyone else, and we wanted to show you that people are thinking about you. So, on behalf of Ripple, we want to give you 4 million dollars”, said the actor.

The operation was done instantly via an app from Ripple Labs, a company Ashton has been investing into, but unveiling no more details on the matter; he just focused on demonstrating how to transfer a great amount of money thanks to an instant payment system based on a decentralized system. In this regard, he commented:

“Now, usually people come out with a big giant check and do the ‘big giant check thing’, but we can transfer it into Rwandan Francs right now right here, and all you need to do is push this button.”

It is worth noting, this enormous donation is not the first one made by Kutcher. Both he and Oseary have promoted donations through their startup ‘A-Grade Investments’, with which they have given support to companies such as BitPay and Sound Ventures, both of them being representatives of the entertainment industry’s growing interest for the blockchain technology.

Who benefits from the US $4 million?

TV host Ellen DeGeneres has charmed countless hearts over the course of more than a decade, around United States. Her talk show is known, among other things, for her disposition to encourage just causes, and to offer help to those in disadvantage; for this reason, in her 60th birthday, her wife Portia de Rossi, decided to please her with the creation of a fund in her name, Ellen DeGeneres Wildlife.

This gift made DeGeneres shed tears, for she has taken multiples opportunities to declare fan of late Dian Fossey, a protectionist who settled in a camp on the mountains of Virunga, Rwanda, to study and take care of gorillas. A big dream that is shared with the host, who has since make it real thanks to her fund.

Kutcher’s donation represents an initiative that goes beyond marketing. Not only managed to get Ellen to promise she would promote the use of new technologies, but also demonstrated that cryptocurrencies can become a part of philanthropist causes.