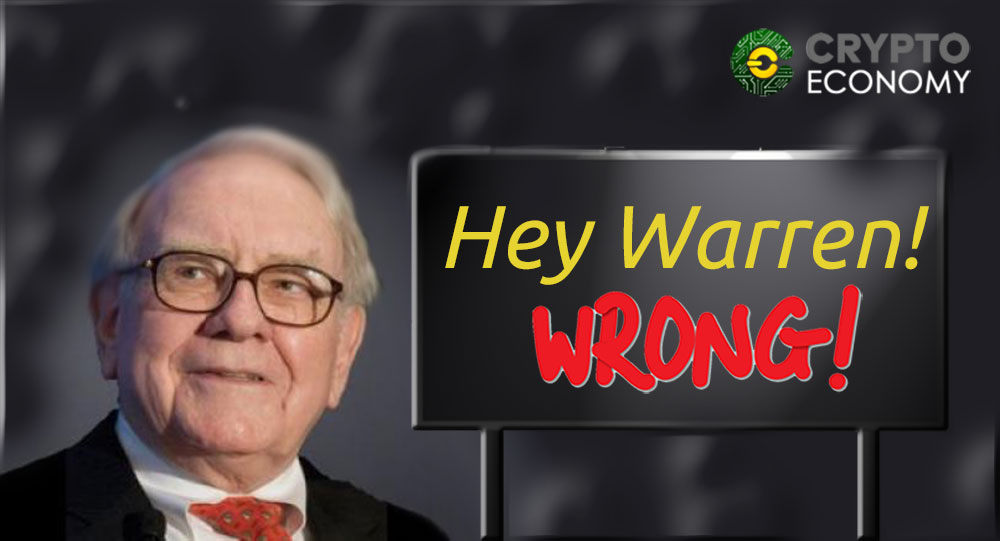 It is public and notorious the rejection that the billionaire Warren Buffet has expressed towards Bitcoin, with his other respectable reasons, but no less controversial. Although bitcoin already has a good stretch of the road, many people still see it as a scam, partly because they do not understand the decentralized nature of it, and also because they see it as a Ponzi scheme, something completely far from reality.

Although so far this year the price of bitcoin has fallen by up to 40% compared to the high prices of 2017, it continues to maintain a stability that presages that it is evolving from means of payment towards a digital asset of value. However, there are those who warn against investing in this bubble, as they have called it many times.

As we have commented on our website, billionaire Warren Buffett has expressed his open rejection of bitcoin and cryptocurrencies in general. But that seems now not to stay there on the part of the enthusiasts of the cryptography. In recent days, a bitcoin mining company has led a unique campaign, placing billboards near Buffet’s office in Omaha, in which a curious but no less blunt question is asked:

The media impact that this has had has not gone unnoticed. In social networks there have been many comments, among which we can highlight the one of Marco Krohn, co-founder of Genesis Mining, who posted on his twitter:

It even activated the hashtag “#BitcoinAwareness” in which you can still follow the evolution and comments of many people about it.

Warren Buffett, undoubtedly a person whose opinions are worth listening to, is not nevertheless an infallible person, and that is perfectly respectable. Those of us who understand the dynamics of bitcoin and even more, of blockchain technology know that Buffett is only being skeptical, and in any case, his opinion does not affect the development of cryptography.

Buffett believes that it is not prudent to invest in Bitcoin as if it were an asset, considering it more a gamble than an investment. He has expressed not infrequently that cryptocurrencies will reach a bad end and he will not invest in them. Said in his own words, he believes that “madness” will have a bad ending.

But if it is crazy, we can entertain a little with his loquacious opinions about bitcoin and cryptocurrencies in general. At the annual meeting of Berkshire Hathaway shareholders in early May, he called bitcoin “rat poison”. Days later he continued to add creativity to his loquacity, pointing out that bitcoin does not create anything and that the buyer has to depend on the next person to pay more and so both are excited about the next person who shows up paying more, of course.

Whatever the case may be, the bitcoin experience is still being written, its behavior in the market has been affected by speculators and has certainly upset, perhaps definitively, its original utility as a payment method due to its high prices, passing through little by little to be a kind of digital asset of value.