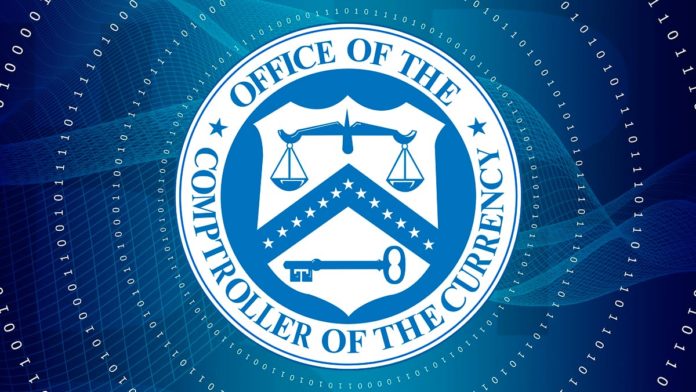 The US Office of the Comptroller of the Currency (OCC) has allowed federally-charted banks and thrifts to participate in running nodes on public blockchains and use stablecoin for payment activities and “other bank-permissible functions.”

According to a press release by OCC on Monday, January 4, acting Comptroller of the Currency Brian P. Brooks, former Chief Legal Officer at Coinbase, published a letter clarifying charted financial institutions’ authority to participate in independent node verification networks (INVN) and the use of stablecoins.

The letter concludes that Fed-charted banks and federal savings associations banks may serve as a node on an independent node verification network (INVN) and use INVNs and related stablecoins to conduct permissible banking activities, including authorized payment activities.

The OCC calls blockchain networks INVN. After this OCC decree, banks can now validate, store, and record payment transactions by serving as a node on a blockchain network. The OCC said that features like electronic payments message transmission, electronic payments processing, and real-time settlement of stablecoin payment systems are “clearly within the business of banking and are functionally consistent with the primary role of banks as financial intermediaries.”

But these blockchains and related stablecoin payment activities should be performed in accordance with the applicable law and “safe, sound, and fair banking practices.” The OCC letter cited a recent statement of the President’s Working Group on Financial Markets that, as reported, requires stablecoin operator to “obtain and verify the identity of all transacting parties, including for those using unhosted wallets.”

“While governments in other countries have built real-time payments systems, the United States has relied on our innovation sector to deliver real-time payments technologies. Some of those technologies are built and managed by bank consortia and some are based on independent node verification networks such as blockchains. The President’s Working Group on Financial Markets recently articulated a strong framework for ushering in an era of stablecoin-based financial infrastructure, identifying important risks while allowing those risks to be managed in a technology-agnostic way. Our letter removes any legal uncertainty about the authority of banks to connect to blockchains as validator nodes and thereby transact stablecoin payments on behalf of customers who are increasingly demanding the speed, efficiency, interoperability, and low cost associated with these products.”

In September 2020, as reported, the OCC also allowed US financial institutions to hold reserves for stablecoins. The recent announcement by the US OCC is another convincing development for the future of the crypto industry as the involvement of national banks will help cryptocurrencies to achieve mainstream adoption.

0
Standard Custody CEO Jack McDonald believes there is a link between the executive order and the situation in Ukraine. He discusses his beliefs and...
Read more
CryptoCurrency News

0
Coinbase published a proposal for an operational framework of the digital asset policy, and there are some interesting ideas in it. Brain Armstrong. Co-Founder...
Read more
- Advertisment -
Posting....