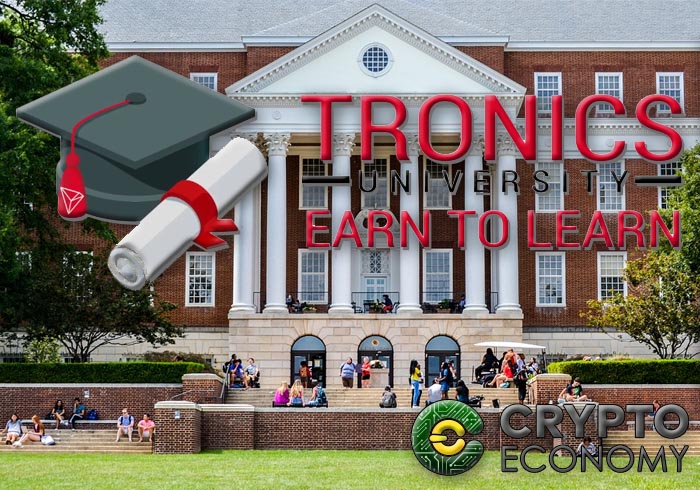 Tron’s MainNet (TRX) has been successfully launched, and aspiring Super-Representatives need to show all their cards to obtain the votes needed to get the desired position, which is why TeamTronics has announced one of their proposals, The Tronics University.

What is the Tronics University?

Tronics University is a proposal of Team_Tronics, a strong candidate to be Super-Representative of Tron, even Jhon Mcafee recommended (among jokes) to the users of the Tron community to vote for it.

“If you are in the Tron community, vote for @team_tronics. Why? Because they are one of the few teams attempting to give back to the crypto community. Also, there are a couple of beautiful women on the team who promised to send me their phone numbers. So vote for them or else!!”, commented Mcafee on his Twitter account.

The objective of the Tronics University is to educate the community on Tron, Blockchain and cryptocurrencies, a training that is increasingly demanded and necessary in many work environments.

The Tronics University offers training for all audiences and levels, and makes available to its users videos, tutorials, tests and exams to perform.

Additionally, full Courses and Degrees will be made that will allow the community to learn and develop their skills in this new technology.

“The next time you talk to someone about blockchain in general or even someone who spreads FUD about TRON, you will be armed with all the information to have a discussion / debate with them and help them understand why you feel that the importance of TRON is so big for the world”, says the aspiring super-representative.

In Tronics University you can obtain a benefit in Tron (TRX) by completing classes, watching videos, reading articles and the amount will depend on the difficulty of the action taken..

This reward method will be an additional incentive for the community at the time of carrying out these studies.

Regardless of the level at which you start, Rookie, Intermediate or Expert, all students will start from the beginning of the corresponding course and will not be able to move on to the next topic until the one in progress is completed.

Those who vote for Super representative Team_Tronics will have an extra token reward in their courses as the team has commented:

“We will not limit who can access our educational material, but to show our gratitude to those in the community who do vote for us, we will increase their rewards compared to a non-voter.”

0
TRON Foundation announced a new program focusing on serious promotion for DeFi services. They plan to attract as many developers and users as possible...
Read more
CryptoCurrency News