The countdown begins for the launch of TRON Mainnet 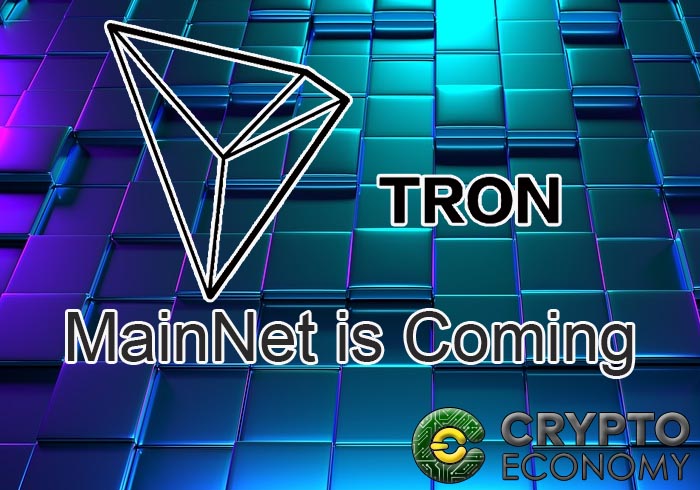 On the 25th, the Tron MainNet will be launched, and that is why Justin Sun (CEO of Tron Foundation) has announced that it has published a manifesto from Medium explaining the steps that will be followed to make it a success.

After completing the preparation phase and working on crisis management, cyber attacks security and a selection of volunteers has been made to serve as Representatives of Génesis de Tron to participate in the launch of the mainnet.

These representatives will form an Independent Group to Tron that will consist of 27 people, who will work to guarantee a successful launch of the Mainnet.

The next day 24 will begin the first Stage called “Guardian Phase”, where the independent group of Tron will begin a general revision of the version and network parameters, before commenting on a joint launching process.

Once this process is done, and after verifying that the nodes are safe, the 27 members of the Independent Group will join the Genesis network, and once a consensus of more than two thirds of the 27 members is reached, the MainNet Tron will be officially launched.

At this point will proceed to the Third Phase, called “Constitutional Phase”, where the 27 representatives of the independent group will be replaced by the Super Representatives, who will be in charge of the government of the Tron network with the co-governed of the community.

Completed the Tron process will cease to be an Ethereum ERC20 token “TRON will officially become a free, autonomous, and self-governed decentralized protocol with robust community consensus.”says the TRON team

To celebrate Tron’s MainNet, on the same day, there will be a 1,000,000,000 TRX burn, valued at around 50 million dollars. (according to the current value of the currency)

Polemic before the launch of the MainNet

On June 18, an article was published in Medium by Digital Asset Research, a company dedicated to the investigation of digital assets, which exposes a series of investigations and accusations of plagiarism that has had the TRON project to date.

“By incorporating a Delegated Proof-of-Stake consensus algorithm into its technology stack, the TRON network will likely be exposed to unique technical risks following its mainnet launch because the project is combining technologies originally developed for different system architectures.” dicen desde Digital Asset Research

0
The Chinese government is trying its best to develop the technological needs of a blockchain revolution. The PRC National Development and Reform Commission announced...
Read more
- Advertisment -