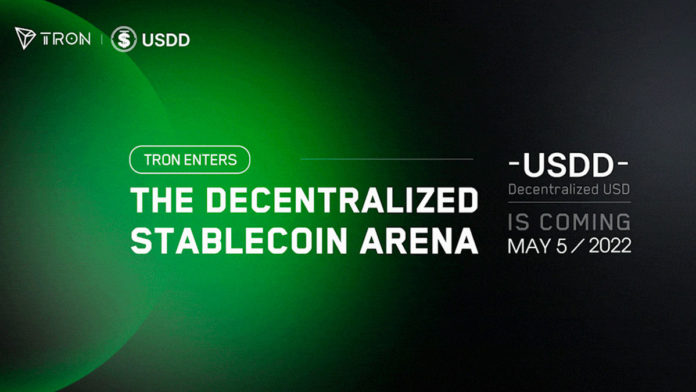 Justin Sun wrote a thorough piece regarding the USDD issuance. It is a Tron-based decentralized algorithmic stablecoin.

TRON DAO collaborated with significant blockchain players to develop USDD (Decentralized USD). This stablecoin uses mathematics and algorithms to keep the decentralization concept safe. As a result, it wants to persist indefinitely without relying on centralized entities.

After the Stablecoin 1.0 and 2.0 periods were represented by Omni-based and TRON-based USDTs, respectively, blockchain is now ushering in the Stablecoin 3.0 era. TRON’s USDD will be at the forefront of this trend.

Sun argues that in the Omni-USDT 1.0 period, stablecoins with no local blockchains were completely reliant on the Bitcoin network. Transfers took an average of more than 30 minutes. Handling costs of up to $100 may apply. Because the network had a daily transfer cap (at 200,000), the entire market cap of stablecoins was less than $1 billion. Centralized institutions redeemed, administered, and held the accompanying dollar reserves.

In the TRON-based USDT 2.0 era, a lot has changed fundamentally. USDT on the Tron blockchain has shown many capabilities compared to Ethereum. The time required for a stablecoin transfer has been substantially decreased from 30 minutes to less than a second, and the processing charge has been cut from $100 to a few cents.

“Four years into the launch of the TRON-based USDT, TRON has grown into the world’s largest stablecoin network, hosting more than $55 billion worth of financial assets. While stablecoins in the 2.0 era are exceptionally fast and affordable, their reserves are still stored, managed, and redeemed by centralized institutions.”

Sun talks about the Stablecoin 3.0 era when describing the new USDD. He claims the USDD will not rely on any centralized institutions for any operations. Instead, it will achieve total decentralization on the blockchain. According to him, USDD will be decentralized and linked to TRX as its base asset. Users and arbitrageurs can transfer 1 USDD to the system and receive 1 USD worth of TRX when the USDD price is less than 1 USD and vice versa. The algorithm will help USDD to always have a value equal to USD.

USDD, like most stablecoins, requires a reserve. The TRON DAO Reserve will protect users against market volatility that is unavoidable. This will ensure that the value of their assets is preserved. USDD on TRON is a little step forward in the development of TRON-based stablecoins but a great leap forward in humanity’s pursuit of financial independence.

USDD’s mission, according to Justin Sun, is to make equal financial inclusion a core human right. He believes that financial services, like water and oxygen, will become a need in the future, accessible to individuals all over the world. It remains to be seen if USDD can help foster this plan.

0
Tron ecosystem heads for decentralization as the foundation announces dissolving by July 25, 2022. The crypto wunderkind and founder of the Tron cryptocurrency...
Read more
Companies