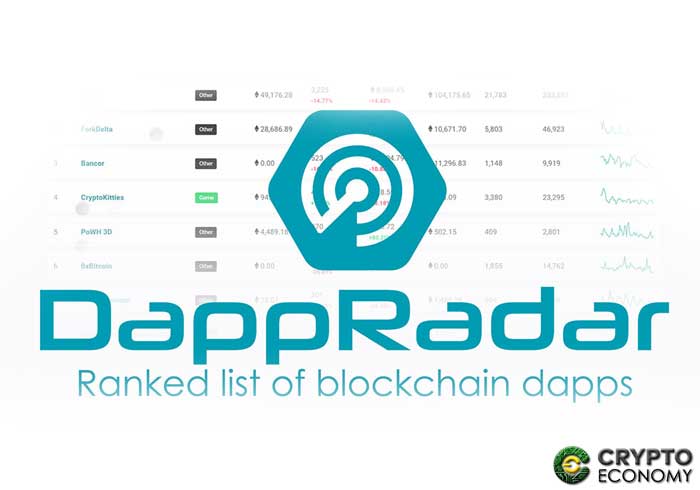 Dappradar; a leading information and analytics portal for DApps, is now taking Tron DApps on board. This will undoubtedly prove a useful resource for all ardent Tron DApp users in the sense that it will be easier to track important information relating to particular DApps. Some of the useful parameters tracked by DAppradar include daily users, metrics, volumes and a many more.

Dappradar is considered the largest data platform for DApps across the globe. It has essentially been a priceless tool for an impressive number of developers and general users by allowing them to track data in a highly convenient way. Ethereum and EOS enthusiasts were the ones who have been reaping the benefits of DAppradar, and the addition of Tron seems to be the right move for the platform considering the ever increasing popularity and user base of the platform.

The Dappradar ecosystem goes extra miles beyond the basics to include charts and graphs that provide developers with almost all the necessary data relating to the latest, highly popular and those which are most functional depending on the way the community embraced the application.

One of the few things that the Tron foundation has pursued with relentless intensity is the development of its DApp ecosystem. Its blockchain has arguably been the busiest as far as DApps are concerned and this is evidenced by the staggering number of transactions which has surpassed blockchain heavyweights such as Ethereum.

A few weeks ago, we witnessed the upgrade of Tron to 0dyssey 3.0 which came with resource management capabilities that allow for efficient management of various resources on the Tron ecosystem. This also led us to the development of the resource trading capability that enables fair pricing of resources along with simplified smart contracts for all developers.

Down the line, the community went on to witness the successful development and launch of Tron DApp house which is essentially Tron’s app store where various DApps can be accessed. Some of the popular DApps already featured on DAppradar include Tronbet, TRONdice, Dicebet, Wintoken games, HitDDAPPs and Dice. TRX.

0
Tron ecosystem heads for decentralization as the foundation announces dissolving by July 25, 2022. The crypto wunderkind and founder of the Tron cryptocurrency...
Read more
CryptoNews

DappRadar Says This Is the Most Popular Blockchain-Based Game

0
Alien Worlds, a blockchain-based play-to-earn game, is currently the most played blockchain that attracted more than half a million users in the last 7 days.
Read more
- Advertisment -
Posting....