Home CryptoNews The Traditional Market Falls and the Cryptos Do Not Raise Their Heads,...
CryptoNewsFeaturedMarkets

The Traditional Market Falls and the Cryptos Do Not Raise Their Heads, Why Are They So Correlated? 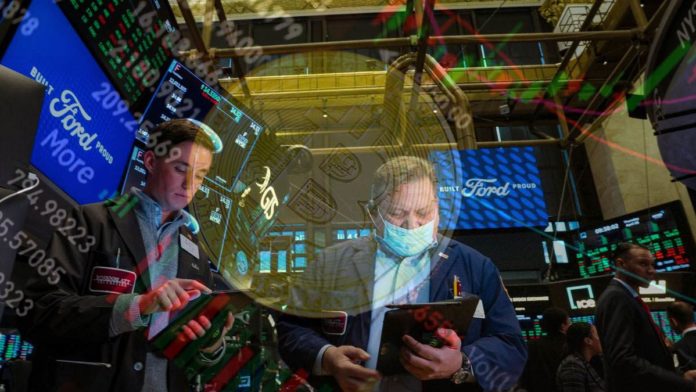 Although Bitcoin and other cryptocurrencies are claimed to be alternative investments, the market stats show they’re very correlated to traditional investments. There have been many incidents in the past years when the traditional financial markets have experienced crashes, and the crypto market followed the trend.

In the last months, this correlation has been seen many times. Besides, the crypto market is showing a correlation with big tech stocks, too.

Reuters published an article discussing recent market drops, referring to them as flash crashes. In addition to being examples of extreme market volatility or structural problems, flash crashes can erode investor confidence.

As a result of an erroneous trade in Nordic markets on Monday, European shares dropped sharply before rebounding shortly thereafter. This is the latest instance of a flash crash in which the price of an asset drops rapidly before bouncing back.

A “flash crash” occurred in May 2010, when the Dow Jones Industrial Average declined nearly 1,000 points before recovering mostly in a matter of minutes. The term “flash crash” is now part of the lexicon of the financial community.

A majority of these errors are due to human error. For example, a trader may accidentally add an extra zero to a large order or request for a large order to be executed immediately rather than dripped into the market. Computer glitches and algorithms can also lead to these mistakes.

On December 4-5, 2021, there was a major flash crash in the crypto market. This led to the loss of $2 billion worth of positions when Bitcoin crashed, wiping out a fifth of its value.

A second example is a volatility which was examined by the U.S. Treasury. According to Reuters:

“Oct. 15, 2014: The market for U.S. Treasury securities experienced high levels of volatility, and Treasury futures prices fell rapidly amid diminished liquidity. The incident sparked a regulatory investigation. While that found no single cause, it noted record trading volumes, a decline in order book depth, and changes in order flow that day that may have contributed to the crash.”

As mentioned above, the “flash crash” incident in the markets happens for many reasons. In the crypto market, it can result in big losses for major cryptocurrencies and make the whole market red. But after all, the crucial fact is that cryptocurrencies are somehow following the traditional markets.

The biggest reason behind the current correlation can be institutional investors that put their money in both traditional and innovative markets. They can buy and sell big amounts of stock and coins and resulting in big volatility over time.

0
In the crypto market this week, there are worrying signs with continuous red days, and it is possible that the entire financial system may...
Read more
CryptoCurrency News

0
Even though the market was bearish and most coins were in red, STEP (GMT) showed another bull run reaching $4. STEPN is currently ranked...
Read more
CryptoCurrency News

0
STEPN (GMT) is a "move-to-earn" token based on the Solana (SOL) blockchain that has skyrocketed since its market launch in March. GMT's price soared 34,000...
Read more
- Advertisment -
Posting....