The European port of Antwerp has launched its first Blockchain project

Applications of blockchain technology give chance for innumerable possibilities, and one of them is, for example, to optimize port activities. Such is the case of the Port of Antwerp, Belgium. It is to every event a step closer to the supply chains that move on blockchain platforms, and it is expected that the greatest impact will be observed throughout the whole of port operations.

There is also the desire to apply this technology to activities such as consolidation of container shipments and an increase in security hacks, and begins to glimpse an idea about how this project could help soften the growing complexity of the industry and consolidate its Role in the global economy.

The container shipping industry is dealing with the most severe financial crisis in its 60-year history. Growth rates have plummeted in recent years as the slowdown in world trade, combined with overcapacity, has taken a toll in lowering volumes and perceived rates. And things do not seem to improve much in the short term.

To help offset this, the major shipping companies have been forming alliances, “sharing” space on container ships. It is not difficult to imagine the whirlwind of documentation that this entails. According to the port authority, paperwork now accounts for up to half the cost of container shipping.

A Blockchain-based platform – in which all participants can access and verify documents in real time, eliminating duplication and costly mistakes – could reduce costs, which would foster trade and provide a boost to the maritime ecosystem.

While ports are only one step in the shipping process, they are crucial as well as a potential bottleneck processing. Shipping and transfer contracts change hands in ports, as agents unload containers and send them to the next stage of their journey. Wrong data and inconsistent forms delay the process, leaving the goods at the dock longer than necessary at the cost of that.

Documentation is a key issue, and port security concerns around the world intensify in the light of recent developments. Earlier this week, shipping giant AP Moller-Maersk was hit by a cyber attack that affected all areas of its business, including its port operations, some of which had to be shut down temporarily. 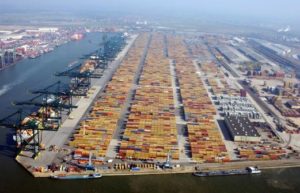 When synchronized steps of supply chains are taken into account, closing a part of the process, albeit temporarily, causes a major disruption, whose ripples can be felt around the world.

Undoubtedly, global offshore centers are aware that a distributed network of blockchain platforms could enhance the security and integrity of key operations. And while the Antwerp project focuses on a specific use case, it is likely that other trials will soon follow. Rotterdam, the largest port in Europe, is also working on blockchain solutions for logistics.

This urgency which is already understood as such will hasten the adoption of blockchain solutions because a sick transport industry will impede economic growth around the world.

Blockchain-based platforms can help make supply chains more efficient, which should boost global trade. But the potential goes much further. It is about strengthening both the business model and the security of a key part of those chains. Without resilient ports, the chains linking world trade will not hold on their feet.

There is no doubt that we are living one of the most notable opportunities for the adoption of blockchain technology with global reach.