Tezos (XTZ) is now available for trading on eToro 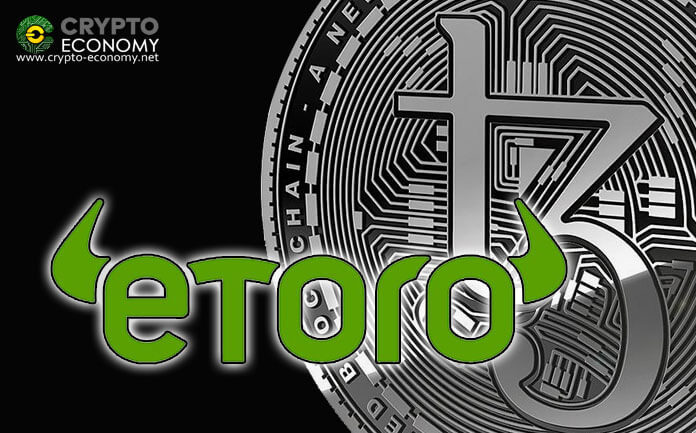 According to a tweet by the official account of eToro, the 16th largest cryptocurrency asset, Tezos XTZ, by market cap is now available for trade on eToro. The eToro exchange is based in the UK and for more than a decade, eToro has been a leader in the global fintech revolution. It is the world’s leading social trading network, with millions of registered users.

The eToro exchange added a new digital asset into its ever-growing selection of cryptocurrencies. The Tezos is the 15th cryptocurrency listed on eToro. It will not only make user able to purchase XTZ tokens but the coin will most likely be implemented on eToro’s CryptoPortfolio.

“Tezos is making great progress and some banks are already choosing its blockchain network for security token offerings worth over a billion dollars. As we see financial institutions move more into the world of crypto, it is important that ordinary investors can take advantage of these technological developments, which is why we’re excited to be adding coins like Tezos to eToro.”

The social platform for investors and traders is putting efforts to attract crypto traders and grow its user base. The company had seen 500 percent growth in the last three years and most of it coming from its cryptocurrency arm, eToroX. That’s why the eToro has made the decision to increase its reach into the crypto realm and the company is trying to link the crypto world with the world of traditional finance.

Tezos’s XTZ coin was founded in 2018 by Arthur and Kathleen Breitman. The couple raised $232 million in ICO and it was the record-breaking amount at that time. This amount then eventually rose to a billion.

However, the Tezos project and its founder are facing several lawsuits in the United States of America. He was blamed for fraudulently marketing the sale of their tokens as charitable, non-refundable contributions in order to avoid governmental and private scrutiny.