Russia Interfered In the US 2016 General Elections Mueller Report Shows 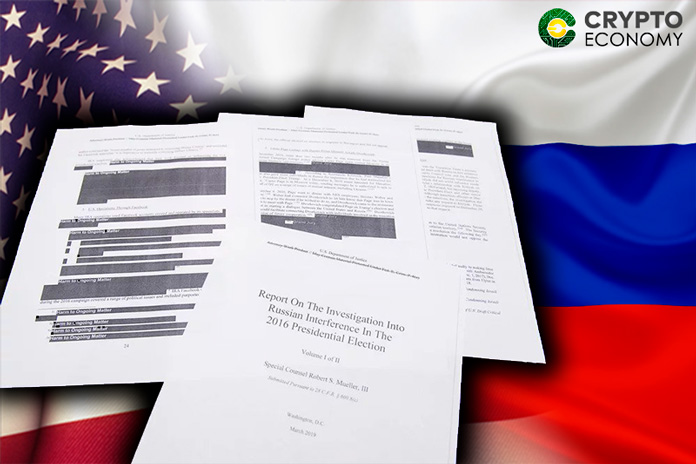 The long-awaited report on the involvement of Russia in the 2016 US general elections is now out bringing an end to speculations that Russia meddled in the polls. The report depicts how bitcoin was used to fund operations of Russia’s Main Intelligence Directorate (GRU) agents who had a hand in the US general elections. While President Donald Trump won against all the odds and is in office, rumors of his winning having been mannered with help from Russia are now confirmed.

Per Mueller reports the GRU agents used bitcoin to hide their identity and were able to buy domains, servers, and VPNs. False data together with stolen identity were used to set accounts for servers, VPNs and also set up accounts at crypto exchanges.

Furthermore, the agents also bought domains through false data. Being in possessions of all the above enabled them to hack DNC servers. The above was also used to spread propaganda which allowed them to interfere in the 2016 polls leading to Hilary Clinton losing to President Trump. Investigations show the GRU agents were working on orders from the Russian military intelligence.

Blockchain and Use of Bitcoin Led To the Above Findings

While the perpetrators thought that using bitcoin would erase all traces of their activities together with hide their identity, the latter is what led to investigators tracing the hacking incidence back to Russia. Using crypto exchanges such as BTC-e to make their transactions led to Mueller’s team finding crumbs of data pointing to Russia. Moreover, FBI agents were also able to get their hands on emails used to initiate the transactions, and through piecing it together with data from blockchain networks, their investigations showed Russians involvement. Blockchain decentralized nature and data blocks come in handy at helping Mueller’s team trace Russian’s covert mission of hacking the 2016 elections.

Moreover, investigators also found Russian agents were responsible for propaganda spread on twitter via @Guccifer_2, a Twitter account. The latter account was used to leak hacked info to Wikileaks together with spreading data whose primary goal was to interfere with the 2016 elections. While it’s general knowledge that bitcoin transactions are anonymous, Mueller’s investigations show how easy it is to trace the transactions to end users.