Bitcoin is a well suited being a store of value. It was initially designed to be peer-to-peer electronic money but its architecture and block generation time may be its weakness.

Blocks are generated every after 10 minutes and before the transaction is etched on the blockchain thereby becoming immutable, purchased coffee may be cold.

That’s a realization that Brad Garlinghouse once again highlighted at the Wall Street Journal event during the World Economic Forum in Davos towards the end of Jan 2020. While efforts are being made and layer 2 solutions being experimented on, XRP as a settlement tool is already shaping the way value is moved across continents.

Ripple Inc. just completed a Serie C funding that pushed the firm’s crowd-funding amount to roughly $294 million driving its valuation to $10 billion. Opinion is mixed on whether this will be good in the long run.

Ripple is one of the best performing Crypto Companies: Abra CEO

However, what is clear is that the firm is firm on achieving its mission of being a viable alternative to SWIFT.

For their consistency, Bill Barhydt, the CEO of Abra in a podcast said he was impressed with Ripple technologies and the firm was actually doing better than 99% of crypto companies.

“I think Ripple the company has built one of the more impressive tech stacks and has much closer to product-market fit than 99% of other projects that are in crypto….but they’re not quite transparent about the actual funding model for the company, which is more or less a continuous fundraise, but one that’s treated as revenue.” 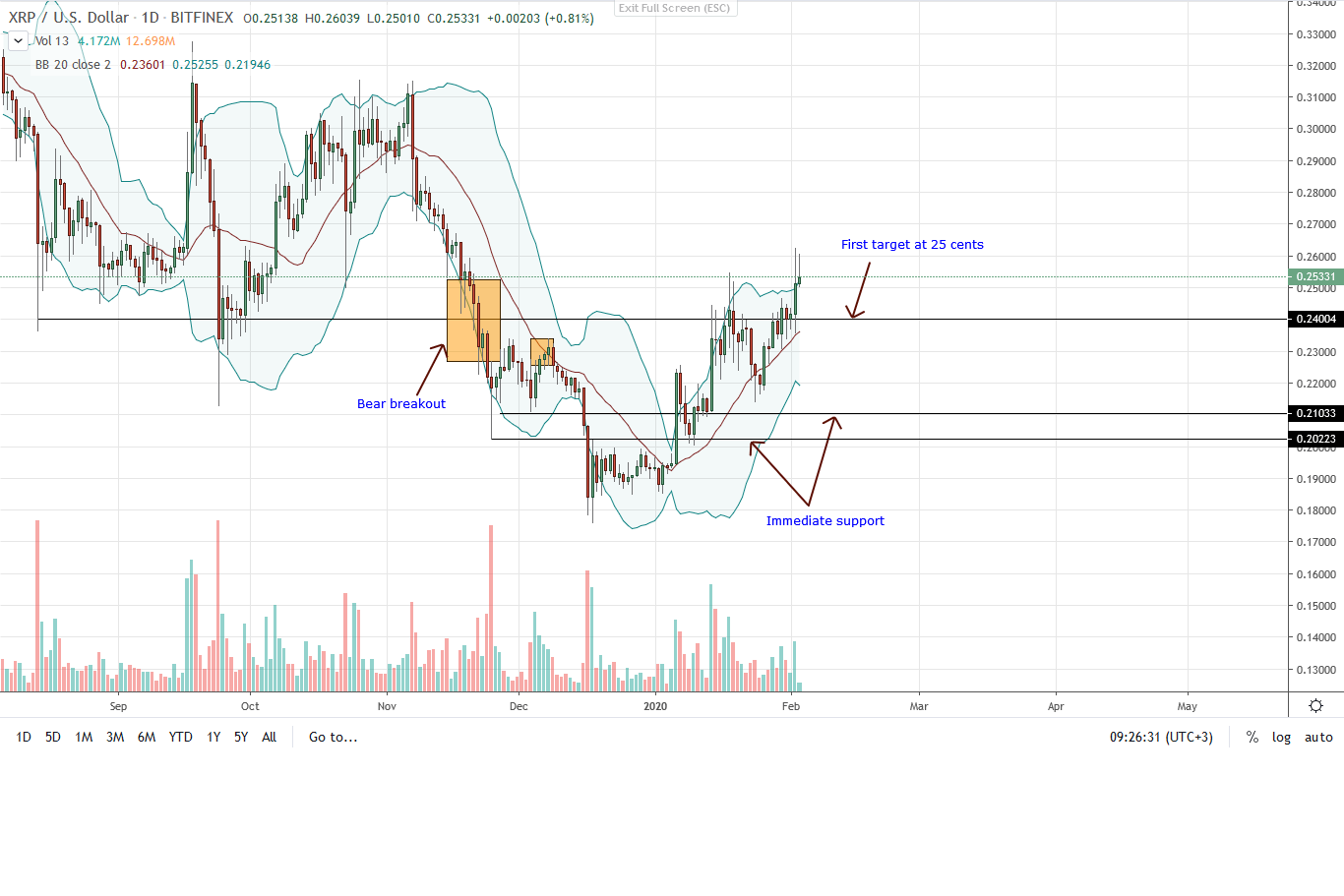 XRP is one of the top performers in the last week of trading. Week-to-date, it is up an impressive 11% against the greenback, pushing monthly gains to 32%.

Notably though, is the close above the 20-week moving average. Visible in the weekly chart, bulls are in charge and prices bottoming up after sinking to lows of 17 cents in late 2018.

This week, it is imperative that XRP bulls maintain this trend and prices comprehensively close above this liquidation level.

Doing so would spur further demand and given the nature of price action and extended price suppression over the past year, the resulting accumulation would easily lift XRP price  to 30 cents and later 40 cents.

Fitting stops would be at around 21 cents. Any dip below that mark nullify this move and shift the stage to bears who will be aiming for 17 cents or Dec 2019 lows.

0
Ripple is up roughly 10 percent in the past trading week, steadying on the previous trading day and within a bullish breakout formation, based...
Read more
- Advertisment -
Posting....