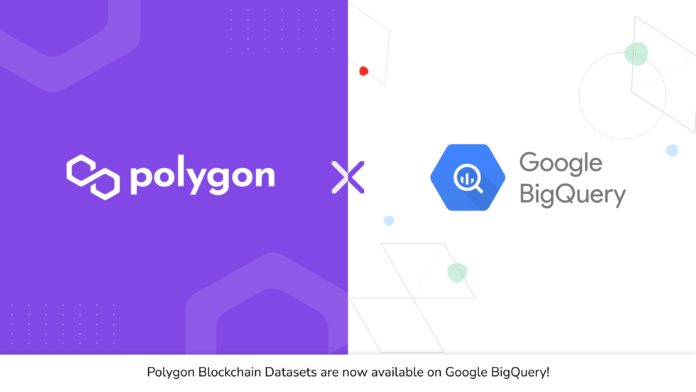 Polygon [MATIC] is on a wild ride. The raucous market environment did little damage to the platform’s ambitious roadmap that revealed no signs of a breather anytime soon. This, in turn, has catapulted its price to soar over 9,000% so far in 2021.

In the latest development, Polygon has announced the integration of its blockchain datasets to Google’s BigQuery in a bid to provide precise on-chain data for the protocol.

The second-layer Ethereum scaling solution’s latest move is in line with its efforts to make crypto data accessible on the search engine’s marketplace through its program called Google Cloud Public Datasets.

Polygon x Google BitQuery: What does the latest integration entail?

Essentially, the program in question is all set to host a number of real-time datasets involving crypto-assets that aim to further advance offerings to incorporate additional distributed ledgers.

These datasets can be found upon searching for the keyword “crypto” in the GCP Marketplace, stated Polygon in its official announcement. Moreover, Google has also reportedly developed a “unified schema” that enables all Bitcoin-like datasets to share queries.

Polygon, which was previously known as MATIC Network, will be able to leverage crucial features with the latest integration. Google BigQuery will enable the platform’s datasets to perform the following function:

“It has been a pleasure to work with Helix Technologies, Nansen, and the Google Cloud Developer Relations team on this project. We look forward to seeing how the vibrant developer community at Polygon uses this powerful platform to bring further utility to their Dapps”

Its native token, MATIC registered a minor uptick following the news. It had sunk below crucial support levels as the market sustained yet another blow from the bulls. Over the at 24-hours, it depreciated by almost 8% which pushed the price down to $1.92, at the time of writing.

One of the most dramatic sell-offs in Bitcoin history earlier this month could not deter MATIC as it went on to hit record levels. Its demand has been on an upward trajectory despite the latest setback. According to a MATIC network explorer, it currently processes more than 6.3 million transactions per day.

0
The Polygon blockchain implemented the Ethereum Improvement Proposal 1559. It will bring the burning of the native MATIC tokens. Besides, there will be improved...
Read more
CryptoCurrency News

0
Arbitrum's network went down temporarily for the second time in less than five months. The team reported that it is back online again.  Blockchain network...
Read more
CryptoCurrency News

0
Polygon has quietly undergone a network upgrade earlier this month that fixed a critical network vulnerability that also resulted in the loss of 801,601 MATIC tokens.
Read more
- Advertisment -
Posting....