Home Reviews Smart Contracts - What are they?
FeaturedReviews

Smart Contracts – What are they? 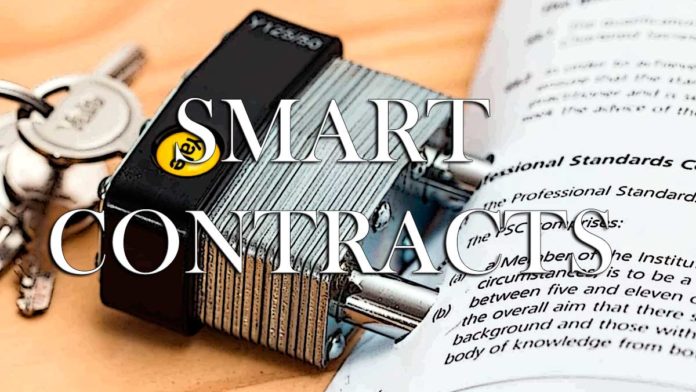 A Smart Contract is a computer algorithm designed to create contracts between two or more parties, these contracts are self-executing in the environment of a blockchain.

They do not need the participation of third parties, such as banks or government agencies.

These transactions are traceable, transparent and irreversible.

Smart Contracts are registered in code form in a distributed ledger, in a blockchain that is maintained and managed by a computer network.

Smart contracts not only contain information about the obligations of the parties involved and the penalties for the breach of any of them. They themselves automatically ensure compliance with all the conditions described in the contract.

The start of Smart Contracts

In the 1990s, computer scientist and cryptocurrency expert Nick Szabo coined the term Smart Contract and defined it as:

“A set of promises, specified in digital format, including the protocols within which the parties fulfill the other promises.”

But with the arrival of Bitcoin and as the crypto ecosystem has been growing, this term has evolved.

Smart contracts are based on previously entered data, which become the rules of the contract.

Focusing on them, the program performs specific actions in accordance with the clauses described.

Use cases for Smart Contracts

When talking about smart contracts with people who don’t know the technology around them, they don’t understand things like, for example:

We will explain several examples and use cases in the daily life of these Smart Contracts.

So, the next time someone asks … What are smart contracts for? You can give several answers.

Before talking about these use cases, we must bear in mind that our entire environment will evolve. It is increasingly common to talk about smart homes or vehicles.

To help smart contracts come true, these smart objects can be an essential part.

When a purchase is made over the Internet using a smart contract, the process is the same as what you would do when paying with fiat money.

When making the purchase, your money is guarded by a smart contract until it is verified that the order has reached the buyer correctly.

This verification can be done for example when you sign the receipt of the merchandise to the courier.

At that time the money in custody is transferred to the seller and the purchase is completed.

Imagine that a loan is requested to acquire a vehicle, this loan is associated with a smart contract where its clauses are detailed.

If the monthly loan payment is not made at the indicated time, the vehicle could lock and stop working until the payment becomes effective.

Rent a house or an establishment

The rent is simple to understand, person A rents a house to person B, for this they agree to pay a quantity of money in a certain time.

If B does not pay A the agreed money, the smart house can block the entrance to the access of the house, for example, through an electronic lock.

A person makes his inheritance and distributes his goods so that when he dies they will be distributed among his loved ones.

Upon registration of the death in the relevant agencies, the smart contract is executed and the assets are transferred to the persons indicated in said contract.

The advantages of these contracts could be summed up in their autonomy, reliability, the security they provide, their accuracy and cost savings.

Not everything can be perfect, smart contracts also have their negative points.

A smart contract may be badly written due to a human error, so at the time of executing that error it can be used maliciously and cause great losses.

As an example of these attacks we have the clear example of The DAO. If you have been interested in the crypto ecosystem for some time, you have heard about it.

This project was created in 2016 and caused great excitement, it was basically a virtual venture capital fund.

In its crowdfunding The DAO raised more than 12 million ETH or 150 million dollars (its value at that time).

But through an error in the Smart Contract code, an attacker was able to steal 3.6 million Ethereum. This news was the cause of the end of the project and a severe blow to the crypto ecosystem.

Keep in mind that like Blockchain and cryptocurrencies, smart contracts are taking their first steps.

This technology is not going to become commonplace in our day to day overnight, although there are now many sectors that use them.

The teams of the different projects work to make these contracts totally safe, efficient and accessible to anyone.

The mistakes suffered in other projects are undoubtedly the best lessons for these developers, since learning from mistakes is part of life.

0
If you're interested in privacy, the Oasis Network is for you. It uses proof of stake and is fully decentralized. Oasis has a native...
Read more
Cardano News

0
Cardano's smart contract era is here. There has been a lot of buzz in the Cardano ecosystem. IOHK, the development team behind the...
Read more
Reviews

0
Bybit is a cryptocurrency exchange with numerous features and services for traders. It offers futures trading as well as other common trading products like...
Read more
Cardano News

0
Cardano blockchain is getting ready for an essential upgrade that adds smart contract support to the network. Alonzo hardfork will happen soon. IOHK, the...
Read more
- Advertisment -
Posting....