The giant Microsoft announced on August 10 a new technology that seeks to accelerate blockchain based systems and make them more private at the enterprise level.

Blockchain technology has always stood out for its effectiveness in maintaining the integrity of data because each participant in a network has its own copy of the general ledger to verify all transactions, however this has been difficult to adopt technology for large companies with strict privacy requirements.

The system is called Coco Framework, which stands for Confidential Consortium. Coco will be ready for 2018 and will be open source. Coco would come where companies could control who sees what was on the net, without slowing it down. Microsoft plans to offer Coco for free, in the hope that the framework’s customers will also use their services in the cloud.

Coco Framework will connect several networks of blockchain in order to solve some of the problems that prevent their adoption, such as speed and privacy concerns. In addressing these two issues, Microsoft hopes that Coco will allow more companies to consider using blockchain-based software.

“We hope this will be the basis for the blockchain for compaies,” said Mark Russinovich, chief technology officer for Azure, Microsoft’s cloud computing division, at a news conference. “We believe that blockchain will potentially transform all industries.” 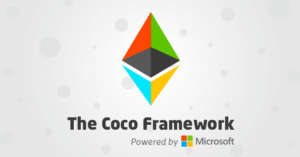 Currently compatible with Ethereum, whose cryptocurrency has soared to position number two in terms of market capitalization and a bargain price above $ 300, Microsoft says that Coco Framework can make the already fast Ethereum even 100 times faster.

Coco is being built in partnership with Intel hardware to be compatible with all types of blocks. While Microsoft expects companies around the world will adopt Coco;  current adopters include Corda, the R3 block chain, the Intel / Hyperledger Sawtooth block chain, as well as Quorum from JPMorgan Chase. More details on the Coco frame can be found in the technical whitepaper.