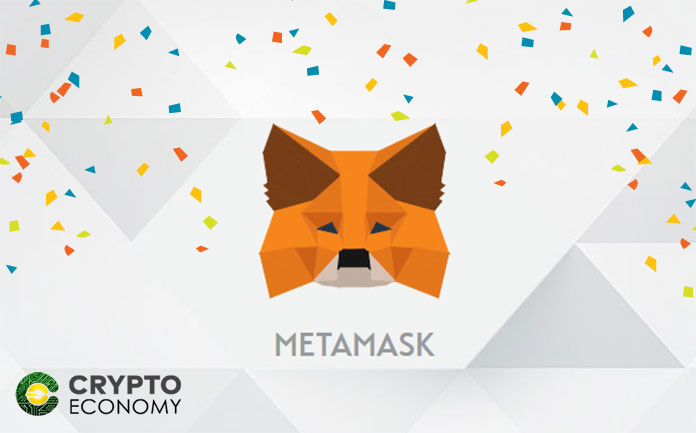 Metamask, the most popular Ethereum wallet is breaking more records by the numbers. Latest revelations indicate that the wallet has been downloaded more than 1.3 million times. Those are the most downloads for any Ethereum-based wallet even for the official Ethereum client.

Announced during the Developers’ Conference in Prague last week, DevCon 4, Metamask is bundled with a bunch of new features. The wallet was released in 2016 and was only available as a browser extension for the past two years but now, users can access even more features through the newly announced mobile interface.

The biggest feature that helps explain Metamask’s popularity is the simplicity of the wallet and its security. The browser extension provides a secure identity vault, a feature that is especially sought after in the cryptocurrency community.

Talking about simplicity, the wallet allows anyone to run decentralized applications (dApps) built on the Ethereum blockchain directly on one’s browser window without having to download the official Ethereum client and running a full node. This feature, in particular, allows Metamask to act as a bridge connecting the Ethereum blockchain with the browser on which the dApp is running.

The Consensys team attending the DevCon did not just declare the number of downloads for their most popular product but took the chance to announce more features being rolled out in the coming days. The first is the ‘Privacy Mode’ upgrade that allows a user to increase their privacy and block websites from inadvertently picking on their account details.

Hardware wallet compatibility is a nice feature that Metamask offers as well. The wallet smart wallet can integrate with both Ledger and Trezor hardware wallets. This allows users to store their private keys in the most secure location. This feature coupled with the secure identity vault give the user a step up on their funds’ security.

The launch of Metamask mobile wallet interface is perhaps the most exciting event that is most anticipated. Now on top of accessing the wallet through a browser extension, you can actually download it to your mobile phone and have access to more features than you otherwise would.

Looking forward, the Consensys team is gearing to launch a couple more features in the near-term, including the support for Gnosis SAFE, an ecosystem that consists of smart contracts that allow many advanced features.

The other feature in the works is Mustekala, a p2p light client for browsers that will allow Metamask to rely less on centralized entities such as the current browsers it has support for. Mustekala is a project being developed by MetaMask Labs.