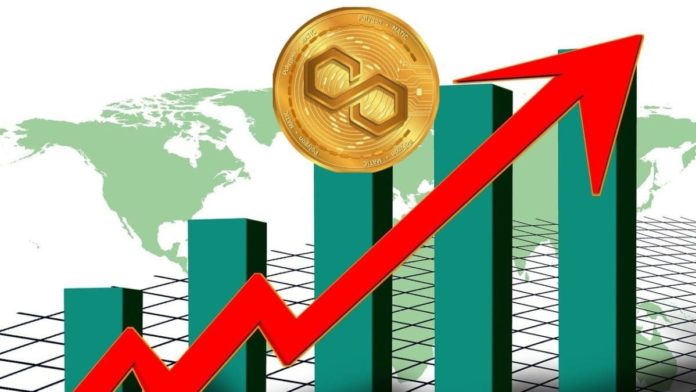 MATIC, the native token of the Polygon network, has been on an upward trajectory with impressive daily surge. The token emerged as one of the best performing assets among the top-ranking cryptocurrencies. What is the reason behind the massive surge?

According to CoinMarketCap, Polygon (MATIC), has gained more than 13 per cent in the last 24 hours breaching the $1 mark. The cryptocurrency is trading at $1.10 at print time. MATIC witnessed a sharp growth of more than 20 per cent in the past 7 days. The overall crypto market has enjoyed a bit of relief across all assets, recently. Bitcoin (BTC), Ethereum (ETH) along with many other altcoins have posted an uptick over the past day. The global crypto market cap upped almost 1.90 per cent in the last 24 hours to $1.03 trillion. 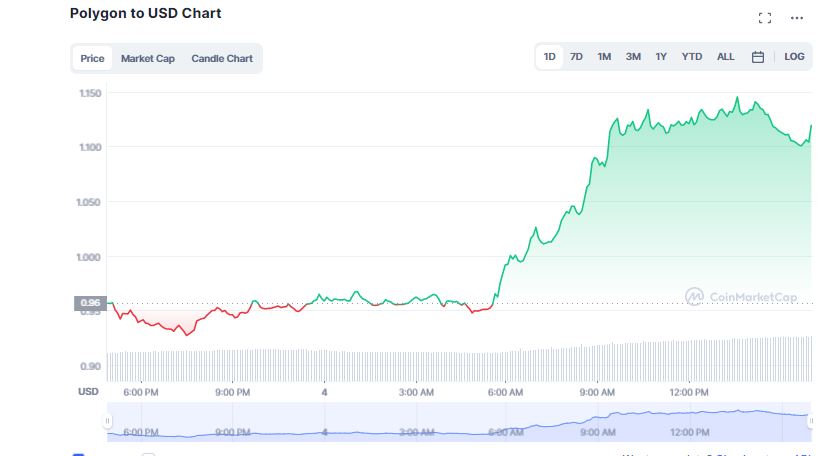 Why is MATIC Soaring?

MATIC’s bullish momentum can be attributed to its network growth that has significantly contributed to the price leap. The token has been rallying since the news about Meta choosing polygon as their partner for their non-fungible token (NFT) offering. Meta revealed that the company will soon be launching a number of a NFT related tools that will enable creators to mint, show and sell NFTs on Instagram. The tech giant has partnered with Polygon blockchain as an initial partner for functionality that would allow its creators to make digital collectables and sell them.

Meanwhile, banking behemoth, JP Morgan announced that it successfully executed its first-ever cross-border transaction using decentralized finance (DeFi) on the layer-2 network Polygon blockchain. The bank said it used Polygon to conduct its first live trade worth around $71,000 on the blockchain, indicating a significant step toward integrating crypto assets into traditional financial frameworks.

On November 4, analytics platform, Santiment, took to Twitter to report that whales have become very active of late. Santiment noted a peak of transactions worth $100,000 MATIC since February. Also, in the middle of October, the balance of MATIC held by whales in their wallets surged to over 10 million.

📈 Do you believe in $MATIC? Today marked the highest amount of $100k+ whale transactions since February for the 11th ranked market cap #crypto asset. A mid-October spike in #Polygon holdings by 10m+ $MATIC whales may have foreshadowed this. https://t.co/LDWRvaJzPT pic.twitter.com/akJhLTXahq

On the other hand, over the last few months, several popular brands chose Polygon blockchain as their preferred partner to foray into the Web3 realm. Multibillion dollar companies such as Coca-Cola, Reddit, DraftKings, Bentley Motors, Quadrata and Starbucks among others have already launched their NFTs on the Polygon network. Earlier this year, Polygon raised $450 million from the likes of Sequoia Capital SoftBank, Tiger Global and Animoca Brands to expand its blockchain ecosystem.

Polygon has also been fervently targeting the Web3 gaming industry. The blockchain firm has also launched a $200 million initiative with Alexis Ohanian’s Seven Seven Six, to back projects at the intersection of social media and Web3.

Several projects, including Aave and Curve, were launched on Polygon last year, and metaverses such as Decentraland have chosen it as their dedicated scaling solution. Decentralized exchanges such as UniSwap and SushiSwap have also launched on Polygon, allowing users to trade the coin without the need for intermediaries.