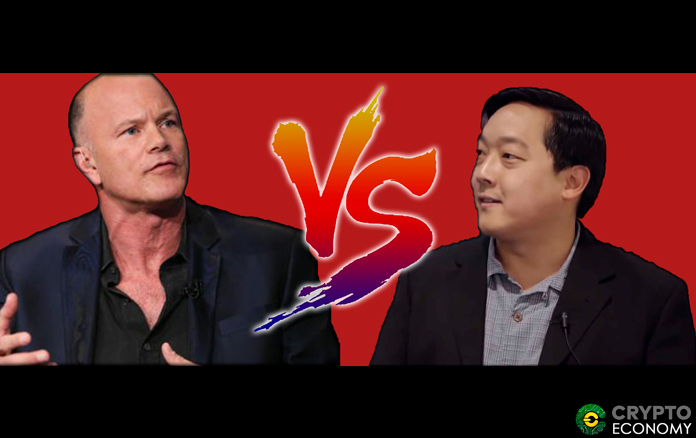 Litecoin, ranked the 4th largest blockchain by market capitalization by Coinmarketcap, has had a roller-coaster ride this week following a price surge by flagship cryptocurrency Bitcoin on Tuesday morning. Litecoin which was trading at about $60 rallied in value throughout Tuesday and Wednesday to June 2018 highs of close to $100, a massive ~60% surge in a matter of hours. Despite the celebratory mood that most blockchain enthusiasts had, apparently some notable figures were not happy with Litecoin’s value appreciation and the one to voice his discontent was billionaire investor, former Goldman Sachs partner and the founder and CEO of Galaxy Digital, Michael Novogratz.

On Wednesday, as Litecoin was appreciating in value, he wrote on Twitter:

I don’t get this rally

In his tweet, he also took a jibe at Litecoin saying that it is a glorified testnet for Bitcoin and advising other investors to sell the coin as he did not see any value in holding it and instead invest in Bitcoin. He wrote:

Litecoin has been marketing itself as the digital silver to Bitcoin’s gold, something that Novogratz was now using against Litecoin.

Not one to go down without a fight, Litecoin creator Charlie Lee responded (as expected) using the opportunity to extol Litecoin’s advantages over Bitcoin. Based on the same blockchain with minor variations, both Bitcoin and Litecoin use the Proof of Work consensus mechanism however, their main variation comes in the mining algorithm that either uses. Charlie’s response tweet says that:

Another Twitter user by the name Jon Moore chimed in with a personal jibe at Novogratz saying that:

Like most rich out of touch Billionaires you have No clue about the use case for payments. LTC is much cheaper to send, 4 times faster than BTC and is also compatible with Lightning Network. People actually use LTC dude!!