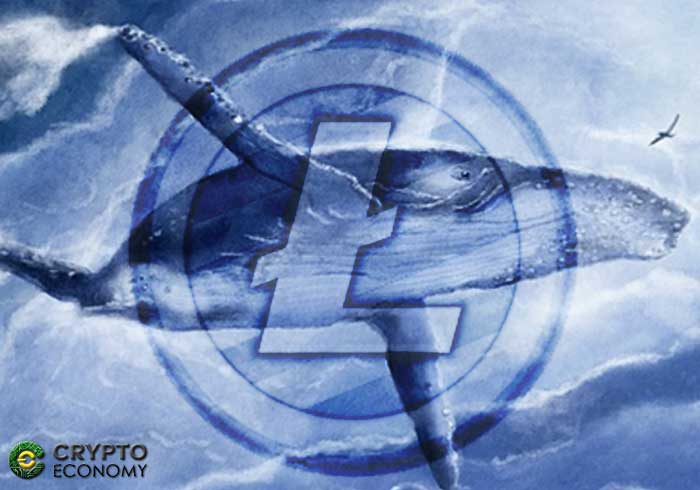 The whale that seems to have taken over 12 million coins off the market in a single creation of more than forty new wallets with 300,000 LTC, has apparently appeared on the Litecoin [LTC] platform. This is according to a recent tweet from the Litecoin foundation.

This massive volume investor, now holding more than 15% of the total possible supply of LTC is however still anonymous to the foundation. There are wild speculations running across the media concerning who the whale is and why it has entered the market at this particular time.

The last time over $1 billion was moved over the Litecoin network in a 24 hour period was way back in February this year following the initial go down staged when panic swept across the crypto markets. After that period the Litecoin network has been transacting $100m daily regardless of the fluctuation.  Well, seems like the coin is now on its way back to glory.

It is speculated that the potential investors may include a single-large buying individual or an institutional investor who may be seeking to consolidate a large position in the coin. Other speculations are that the addresses could be owned by Bakkt or Fidelity.

These are however just speculations since the analysis of global exchange trading does not account for this sheer volume and it neither appears to be a direct consolidation from other addresses. It is also not yet clear whether this is an exchange moving its users’ funds offline or Over the Counter [OTC] traded funds being moved into private wallet addresses.

How Litecoin Views this King Whale

The data contained on the BitInfoCharts is equivalent to 60% of Litecoin’s total market capitalization. According to Litecoin.com, ‘12m Litecoin are now out of circulation, elevating a significant potential selling pressure on the open market’ in case this big whale is not an exchange.

The site also points out that ‘if it is however an institution, one could theorise that these addresses may be potentially owned by Bakkt or Fidelity, pre-emtively taking a large stake in the market in preparation for their respective launches early next year.’

Since inception, the p2p digital currency has enabled instant, near zero cost payments and complete transaction privacy to all its clients across the globe.

0
Litecoin broke a multi-year low as the broader cryptocurrency market continued to tumble. It continued to slide down the crypto rankings, but will...
Read more
- Advertisment -
Posting....
We use cookies to ensure that we give you the best experience on our website. If you continue to use this site we will assume that you are happy with it.OkPrivacy policy