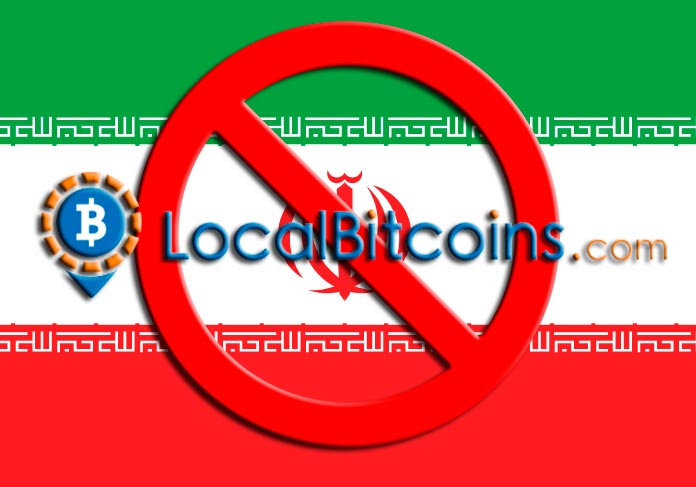 Leading peer to peer bitcoin exchange LocalBitcoins has disabled support for its Iranian users in what is suspected to be highly related to the US- sanctions against the Middle Eastern country.

Users began experiencing problems with creating trades on the platform which prompted some to seek support from the support desk only to be told that their region is unsupported.

An image making rounds of social media shows a response to one of the traders on the platform by one of the support representatives who responded to the trader’s question about whether there are any bans against traders from Iran. The representative says

“Unfortunately our service is no longer available in your country. If you have an account already, you will be able to withdraw your bitcoins, but you will not be able to use the platform for trading.”

The exchange’s Iranian page is no longer operational with the text:

“Unfortunately, LocalBitcoins is currently not available in your selected region.”

It offers no further details on the matter. On social media platforms, the exchange has responded to some users saying:

“Our services are not available in your region for risk-based reasons.”

LocalBitcoins is headquartered in Finland and sources have confirmed that financial regulations have been recently updated to make provisions for US-based sanctions.

This could explain the latest move by the leading bitcoin exchange to excluded Iranian users despite the rise in trading activities from the Iranian users over the recent past. Several other cryptocurrency exchanges have been forced to withdraw their services for Iranian users as well including major platforms such as Binance, Coinbase, Bittrex and ShapeShift.

The platform appealed to Iranian users mostly due to its wide support of different payment methods. Visa, MasterCard, and PayPal, one some of the first global financial service providers to withdraw their services from the country.

LocalBitcoins, however, allowed users to trade with their local bank accounts, a feature that very appealing. The platform has grown in popularity across Iranian residents as Bitcoin has become also more prevalent across the world.

This means that people can send and receive Bitcoin globally without relying on censorship-prone services. LocalBitcoins became the easiest way to convert those Bitcoins into fiat currencies thereby circumventing the US sanctions.

With the withdrawal of services by LocalBitcoins, Iranian users are forced to adopt alternatives that are more impervious to sanctions. Some of these alternates include Bisq which eschews the KYC procedures to offer its users an interface that is both private and anonymous.

Another platform is Hodl Hodl that has an interface specifically targeted at Iranian users called Farsi.

Last but not least, the upcoming KeepChange peer-to-peer exchange which touts itself as a believer of the Bitcoin ethos of decentralization and censorship resistance.

In one correspondence with one user on May 19th, the exchange said that:

“Iranian users, as well as any other nationalities anywhere in the world, can use KeepChange for buying and selling bitcoin without worrying of any kind of censorship, sanctions, money seizures, etc.”