KICKICO hacked, loses $ 8 million due to a smart contract breach 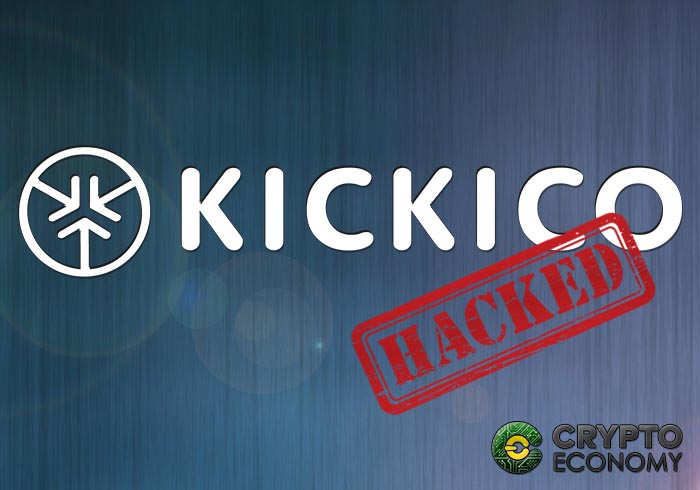 Initial coin offering (ICO) platform KICKICO, has lost more than 7 million dollars following a hack of its system in July 27.

Around 70 million KICK (startup’s native token) that equals 7.7 million dollars, was the amount heisted from the aforementioned platform, following the breaching of one of its smart contract by hackers.

Via his blog, the company’s CEO Anti Danilevski, informed that around 70 million KICK tokens were stolen from its wallet as a result of having the private key of the smart contract compromised.

“KICKICO has experienced a security breach, which resulted in the attackers gaining access to the account of the KICK smart contract — tokens of the KICKICO platform. The team learned about this incident after the complaints of several victims, who did not find tokens worth 800 thousand dollars in their wallets,” the statement reads.

He also added that several users’ wallets were emptied during the heist, although the company promised to return the funds lost to their respective holders.

“The KICKICO team will reimburse to the 40 owners of the 40 accounts, reproducing the 40 compromised wallets,” Danilevski says.

This cyber theft case is unique (as of yet), due to being the first time a group of hackers managed to gain access to the smart contract of the KICKICO blockchain, obtaining the private key of the KickCoin contract.

It looks like the criminals destroyed tokens held in 40 wallet addresses and generated tokens in other 40 different addresses to avoid being detected by the KICKICO team. This was possible by integrating the KickCoin smart contract with the Bancor network.

Given that the stolen quantity was replicated and not destroyed, the minimal supply of KICKICO kept the same thing, even after the heist.

A few days after, KICKICO began to regain control over the smart contract, replacing the violated private key, with the purpose of ensure safety to the network and the funds of the rest of users, as well as to return all lost tokens.

“Thanks to the rapid response of our community and our coordinated team work, we were able to regain control over the tokens and prevent further possible losses by replacing the compromised private key with the private key of the cold storage,” the statement said.

According to KICKICO developers, the platform was attacked following an accelerated increase it has had in the last weeks, for its price has tripled – going from $ 0.04 (ICO price) to $ 0.12.

Despite this, the explanation has left users and specialists in the field uneasy, alleging that other major digital trading platforms, ICO tokens and blockchains around the world, are constant targets of crypto-thieves.

0
The U.S Treasury Department has added new names and crypto addresses to its list of specially targeted Russian hackers. This time round, the agency...
Read more
Regulation

0
According to a publication of Finnish news outlet Yle on November 22, more than 200 Finnish municipalities and public organization are practising how to...
Read more
CryptoCurrency News

0
After the hacking of exchanges, sim swapping is the second most huge challenge crypto investors are facing. The latter has led to authorities receiving...
Read more
CryptoCurrency News

0
17 countries are in the list of affected countries by North Korean cyber attacks. The neighboring South Korean crypto exchanges are also among these...
Read more
CryptoNews

0
Cell phones have become an integral part of the lives of many people in that without them, it sometimes seems that the individual is...
Read more
- Advertisment -
Posting....