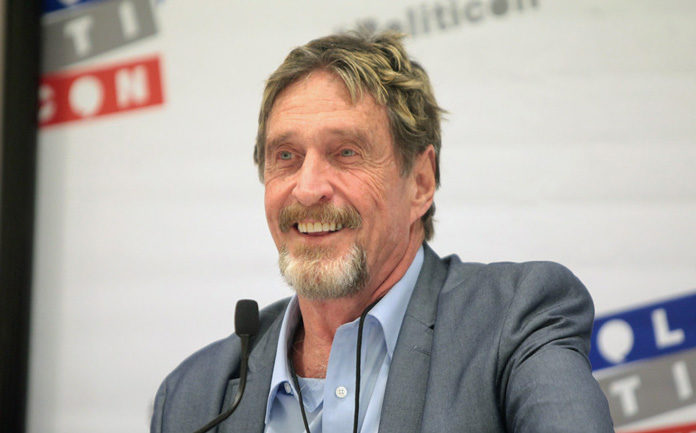 Authorities in the Dominican Republic have released the great cryptocurrency advocate John McAfee. McAfee posted on his Twitter account that he was well treated during his detention, which lasted four days.

“Leaving detention (don’t judge my looks – four days of confinement). I was well treated. My superiors were friendly and helpful. In spite of the helpful circumstances, we’ve decided to move on. More later.”

A report by the associated press appears to have confirmed Ramirez’s suspicion. According to the report, McAfee was arrested on the North Coast of the Dominican Republic. Authorities seized high calibre weapons and other military props on his vessel during his arrest.

McAfee has been running a campaign for president of the United States from self-imposed exile. He is conducting his campaign from abroad due to alleged indictment by the U.S. Internal Revenue Service (IRS). McAfee said that the IRS has convened a grand jury in the state of Tennessee to charge him, his wife and four of his campaign workers with unspecified IRS crimes of a felonious nature.

He was quoted stating:

“The IRS has convened a Grand jury in the state of Tennessee to charge me, my wife and four of my campaign workers with unspecified IRS crimes of a felonious nature.”

McAfee has also said that his campaign is not a serious bid for office, but rather a means to promote cryptocurrency.

In a recent interview, McAfee said that he believes fiat money will be dead within 10 years. He says that he thinks that in 10 years there will be no fiat anywhere in the world. He believes everything will be in cryptocurrency. In stark contrast, U.S. Treasury Secretary Mnuchin recently said that he will not be talking about Bitcoin in 10 years.

John McAfee: The Story of a Crypto Enthusiast

0
John McAfee was born in the Forest of Dean, Gloucestershire, the United Kingdom on September 18, 1945, to an American father and a British mother...
Read more
- Advertisment -