Jack Dorsey Believes Diem Was a Waste of Time and Effort 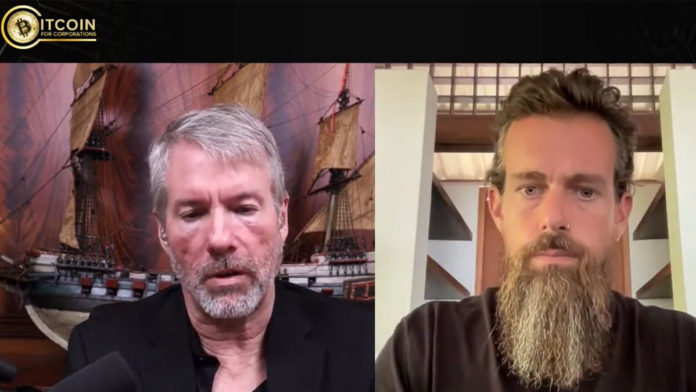 Saylor, the CEO of MicroStrategy, conducted an interview with Jack Dorsey about how the world’s largest cryptocurrency by market capitalization, Bitcoin, could benefit corporations. Dorsey, who left Twitter last year to devote his time and energy to Bitcoin, has even stated that Facebook’s intentions to launch its own cryptocurrency were flawed from the beginning and that the company should have concentrated its efforts on Bitcoin instead.

Since stepping down as CEO of Twitter a few months ago, Jack has concentrated his efforts on Block, another firm he co-founded and currently serves as CEO.

On Diem, Jack didn’t hold back, claiming that Zuckerberg might have done a lot more for humanity if he had concentrated on Bitcoin instead of Facebook. He feels that while Facebook most likely started Diem, formerly Libra, for the right reasons, they lost sight of the bigger picture along the road.

Bitcoin is already in use and has demonstrated that it has the potential to usher in a more egalitarian future in which everyone has the ability to better themselves, according to Jack. Thus, Facebook should have taken advantage of its celebrity and network effect to make this information available to the 2.8 billion individuals who utilize its social media platform.

During the interview, Saylor referred to Bitcoin as an egalitarian, utilitarian technology, and he predicted that the cryptocurrency would create real value going forward for financial services organizations going forward in the future.

In the wake of years of frustration with regulators in the United States, Facebook recently declared defeat with its Diem project. According to reports, the social media giant sold the project to Silvergate Bank for less than $200 million, with the hope of recouping some of the money that its partners had committed in the venture.

The company has been collaborating with Silvergate on a collaboration that would have seen the California bank issue Diem due to the fact that it is a licensed financial entity. But even this arrangement was rejected by the Federal Reserve.