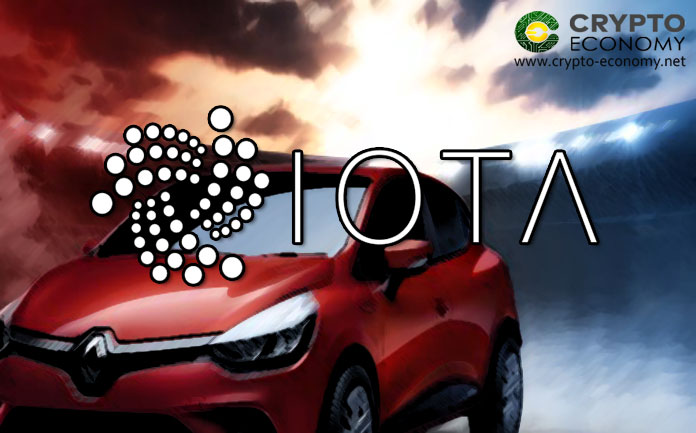 IOTA the platform that aims to thrive the modern cities with his technology is always on the edge when it comes to innovation and development, and looking at their current tendencies, they do not seem to have changed their incentive, indeed, the smart city platform will launch, associated with the French automobile dealer Renault, a Hackathon in the next month.

The company recently announced that they will be organizing a Hackathon that should be sponsored by Renault, according to the team this Hackathon will have for main goals to help to develop their platform but also to spot potential fails in their system.

Indeed, the concurrent will have to come with solutions using new technology to resolve problems faced by cities all over the world, problems that would be submitted by a bunch of partner of the company, the concurrent have to use distributed ledger technology to bring solutions to the stated issues like transport, energy, and building management.

In their announcement, the team stated that this event will be hosted by Hackster.io, a well-known hardware community hub since it is run probably by the largest electronic hardware distributor in the world Avnet, also, the team announced that the event will be held on April 6 and the winner of the contest should be announced on April 13.

This event is not an ordinary Blockchain Hackathon as the smart city platform standout of the traditional basis of the Blockchain technology with its tangle-powered protocol that uses Direct Acyclic Graph, the concurrent of this event will have to use this tangle-powered protocol to bring new concept for smart cities based on internet-of-things (IoT), machine-to-machine (M2M) and data-driven system.

Partnership after partnership IOTA foundation is continuing its path toward a world establishment, the company already has sealed deals with many Chinese cities but also many other cities all over the world, as it has been reported that Ping, a Chinese global insurance corporation and Sanya municipal government partnered with the smart city platform to bring IOTA’s technology to the cities of China.

At this rate, maybe in near future we will witness an entire world powered with smart cities.

0
Algorand Foundation, a Singapore-based organization managing Algorand blockchain protocol, has announced a grant partnership with TiE Global, a Silicon Valley-based nonprofit organization devoted to entrepreneurs in all industries, to empower college students to become the next generation of innovators & entrepreneurs in blockchain technology.
Read more
CryptoNews

TQ Tezos and Coinlist Hold Tezos Hackathon on May 25th

0
Tezos Hackathon is the latest hackathon announced in the blockchain community that will hold from May 25th to June 25th. There will be a...
Read more
CryptoNews

0
<THE METAVERSE, July 2019>​ - Decentraland, the virtual world powered by Ethereum blockchain, announced today that it will be conducting its biggest ever Hackathon...
Read more
- Advertisment -