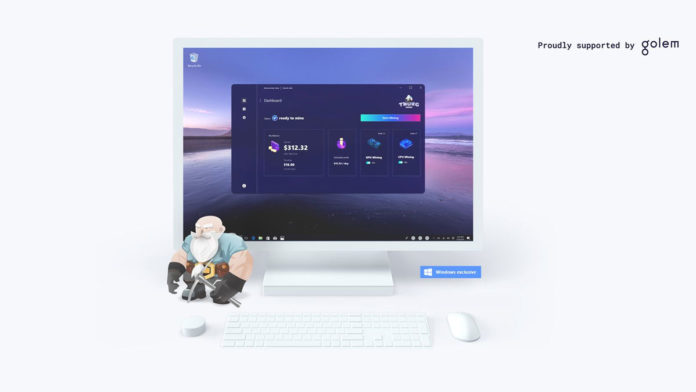 In simple terms, Golem tries to make mining on Ethereum easy for everyone. The current version needs good GPU power, but the team says mining with CPU will be available soon.

Another Opportunity for Passive Income?

Cryptocurrency mining has always been an attractive income opportunity for many users. It somehow provides a passive income from computers but has always had challenges in terms of needed hardware and electricity usage. There are still many scrutinizes around Bitcoin mining because of its huge energy usage. Besides, you can’t mine Bitcoin with ordinary machines anymore. But there are still many options that make it possible for mainstream users to mine crypto. Golem Network launched one yesterday.

Thorg is the new mining application for Windows users powered by Golem Network. It has an easy user interface with an easy installing process. The design is focused on UX and works in a non-custodial way.

Besides, Thong benefits from layer 2 payments built on Polygon. Users can download and install the application and start mining GLM tokens with their GPU. According to the announcement and the official website, mining with CPU will be possible soon. The install and running process is simple. You just need to download the app from the Thorg.io website and create a wallet.

The mining process in Thorg is simple. It allows Windows users to compute tasks that create “shares.” These “shares” are collected and used to mine Ethereum. The GLM token is the native token of the Golem Network. Miners Receive this token based on their contribution to creating “shares.” GLM token is used for selling and buying computation on Golem Network. As mentioned above, Thorg uses a Polygon payment driver that makes cheap transactions possible.

Piotr “Viggith” Janiuk says about the new mine app:

“Golem is still an evolving project well-suited to harness more and more use-cases. Thorg is a way for us to show progress in several technical development areas and battle test them by making them available for both end-users and our growing developer community. The Thorg implementation aids as well in improving the Golem market: the mining use-case opens new ways of achieving a healthy and efficient market by providing additional tools for optimizing passive income with Golem.”

Users need Windows 10 or above for mining with Thorg. The system should have at least a 6GB graphics card. But mining with CPU will be available soon.