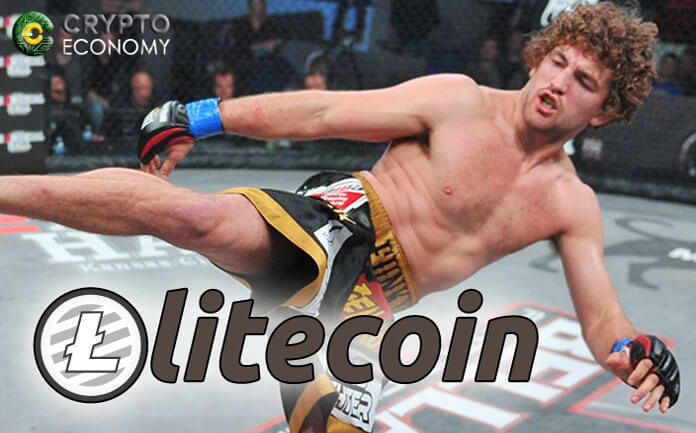 As most coins grapple with the January bear market blues, Litecoin is out there selling itself to the masses. Back in December last year, Litecoin Foundation scored a win when it sponsored an Ultimate Fighting Championship (UFC) match between Jones and Gustaffson – the UFC 232 fight.

The Litecoin logo was prominently displayed on the canvas during the match. At its peak, the pay per view event was watched by more than 2 million viewers. It seems Litecoin found a home at the UFC arena because according to an announcement by one of the UFC fighters, it is poised to sponsor him for a UFC match.

Former Olympic Wrestler Ben Askren is set to debut at the UFC ring Welterweight match against Robbie Lawler for UFC 235 and his main sponsor is Litecoin Foundation.

Askren took to Twitter to express his appreciation to the Litecoin Foundation and community at large for the vote of confidence. In the 35 second video that he uploaded, he also mentioned that he was an investor in Litecoin and a big believer in Litecoin’s vision of bringing decentralization to the masses.

“What’s up Litecoin community? I just wanted to thank you for the sponsorship for UFC 235. I’m especially honored to represent you guys because you are a cause and something I believe in. Obviously, I hold a lot of Litecoin myself. I think it’s especially great when not just that I get a sponsorship, but when I get one that I believe in and that I think can help make a better future. And I think that all of you guys see that vision as well,” he said. In his tweet, he tagged Litecoin creator Charlie Lee and John Kim a Litecoin community ambassador.

“I’m excited to see the community (#LTCEastCoastTeam & #LTCWestCoastTeam) come together to support @Benaskren. Litecoin Foundation takes no credit for this. Good luck in UFC 235, Ben!”

0
Litecoin Foundation announced a new token creation platform called OmniLite that can be the start of NFTs on Litecoin. But can be enough to...
Read more
- Advertisment -