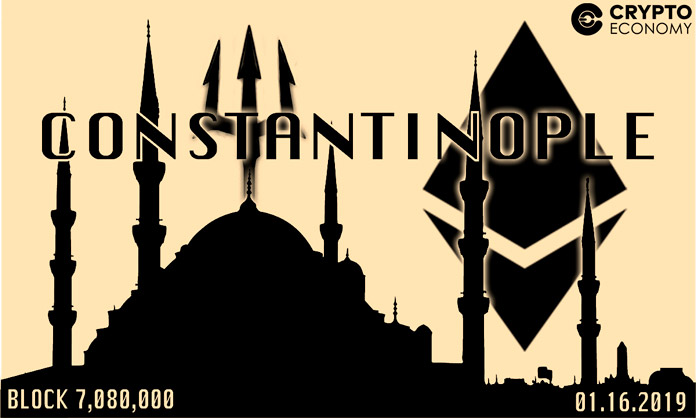 The much-awaited Constantinople hard fork scheduled to activate on block #7,080,000 is now only a few days away. According to calculations by Consensys, in which they shared in a blog post, the hard fork is expected to happen on Wednesday, January 16th, 2019. The blockchain is currently on block #7,054,242 which leaves about 25,760 blocks to the scheduled activation. The exact time for which the said block will be mined cannot be announced as it is difficult to predict considering that block generation time varies. However, with an average block generation time of approximately 15.3 sec (an average of the last 5,000 blocks), it can be confirmed that the day is indeed Wednesday but the time could vary according to market conditions.

Following the announcement of the rolling out of the fork this January, at least 19 exchanges have provided their users with a platform that will support the new blockchain after the upgrade. The announcement was made back on December 6th, after Ethereum core developers agreed to roll out the upgrade at the block #7,080,000. Since then, most exchanges have opted to set up the infrastructure necessary for the new blockchain. Among the first exchanges to make the announcement to support Constantinople was OKEx, one of the leading exchanges by trading volume.

“We will support the Ethereum (ETH) Constantinople hard fork and will take a snapshot of all the OKEx accounts at the block height 7,080,000 (which is estimated to occur between Jan 14 – 18).”

Huobi, another high volume trade exchange followed suit and announced its support for the same. On January 3rd, through a blog post, it said:

As of print time, several other exchanges have confirmed support of the Constantinople hard fork including Binance, Bittrex, Cryptopia, and OKCoin. The rest are low-volume exchanges which are IDAX, Koinex, BitMart, BiBox, HotBit, EtherFlyer, BitForex, WazirX, Exodus Wallet, Catex, Indodax, TOK, and ABCC. As of yet, 19 exchanges have confirmed their support of the hard fork as several others are expected to follow suit.