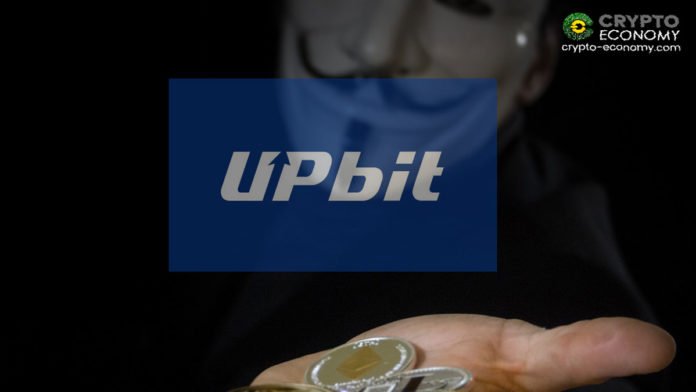 South Korean cryptocurrency exchane UpBit has reported the occurrence of an abnormal transaction of outgoing ether from the exchange’s hot wallets to an unknown wallet.

The transaction, which occurred on Wednesday morning at 4 AM (UTC) saw 342,000 ether (ETH) worth about $49.6M as of press time transferred from the UpBit wallet. An UpBit executive Lee Seok-woo, the CEO of UpBit’s operator Dunamu said in a notification on Wednesday that the exchange responded immediately to the security incident by transferring “all” other assets from hot wallets to cold wallets.

Whale Alert, a Twitter bot that tracks any significant cryptocurrency asset movements has shown that several other assets have been moved out of UpBit wallets. Actually, more than $100 million worth of transfers out of UpBit wallets has been tracked by the bot service.

Approximately one hour after the said Ethereum transaction was sent, several others for Tron [TRX] for BitTorrent [BTT] were also recorded. About 10 transactions of TRX tokens each worth about $1.51 million were recorded outgoing from UpBit to unknown wallets. $3.5 million in BTT was also recorded soon after.

Not just these there were also other transfers that were picked up around the same time including the transfer of Stellar [XLM] ($8.7 million), $1.08M in OmiseGo token [OMG], $22M in EOS and $3.4M in Status [SNT] tokens.

According to Seok-woo, however, all other transactions other than the abnormal Ethereum transaction were conducted by UpBit as it transferred the assets to cold storage. The executive also mentioned that any losses incurred to the customers will be covered by the exchange. The exchange has since canceled all operations including deposits and withdrawals and estimates that they will remain in suspension for at least the next two weeks.

The latest incident adds to a growing list of exchanges that have fallen victim to hacks this year alone. Cryptopia, a New Zealand-based exchange went in bankruptcy shortly after resuming operations following a hack early in January.

Then followed other major hacks including leading crypto exchange Binance which was hacked in May, BiTrue, Bithumb, Bitpoint, VinDAX, and DragonEX. Binance, which lost about $40M worth of Bitcoin compensated its affected users through its asset insurance dubbed #SAFU.