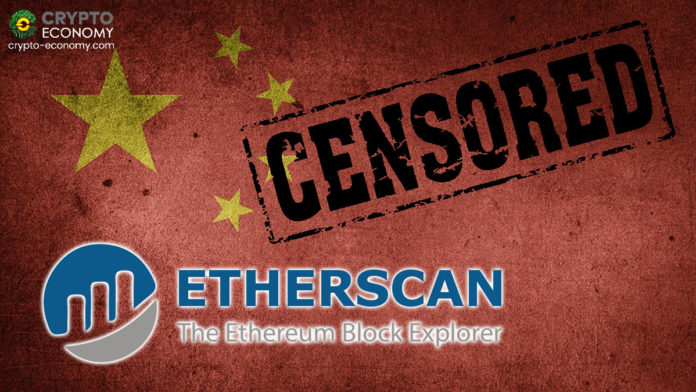 Popular Ethereum block explorer Etherscan.io has been blocked in mainland China by the great Chinese firewall. This means that no IP address originating in China is able to access the website unless they are using a virtual private network (VPN).

It seems that only Etherscan.io is blocked among the popular Ethereum block explorers. cn.etherscan.com, another explorer that mimics the design of Etherscan.io and used within mainland china is still accessible. Other explorers such as blockchair.com, Etherchain.org, and Ethplorer.io are not blocked as of publication.

Even though there is not an official statement on the blocking of the website, it could be speculated that Etherscan may have come into cross-hairs with the Chinese censorship agents last year. At the height of the #Metoo movement, cryptocurrency users in China used the Ethereum blockchain to encode censored articles and share them on the Ethereum network where they are essentially immutable and censorship-resistant.

Etherscan, provided a smooth interface to access the embedded information. Chinese users on WeChat would then share the hash provided by the explorer on their profiles thus circumventing the censorship.

“Some have used this feature to post sensitive messages without the need to worry about the message being blocked or removed, or their identity being exposed,” Matthew Graham, CEO of Sino Global Capital said. “Anyone with a blockchain explorer like Etherscan can view these messages, so it is not surprising that this website has come in the crosshairs of internet censors.”

For Etherscan users in China, there is still plenty of choices for alternatives which may explain why the blockage has gone for so long unnoticed.

0
Fox Business reported that the US economy had entered a technical recession after growth dropped 0.9% in the second quarter, according to a report...
Read more
Bitcoin News

0
Ethereum, like the rest of the crypto markets, is under immense selling pressure. Currently, the coin is steady, adding three percent in the last...
Read more
- Advertisment -
Posting....