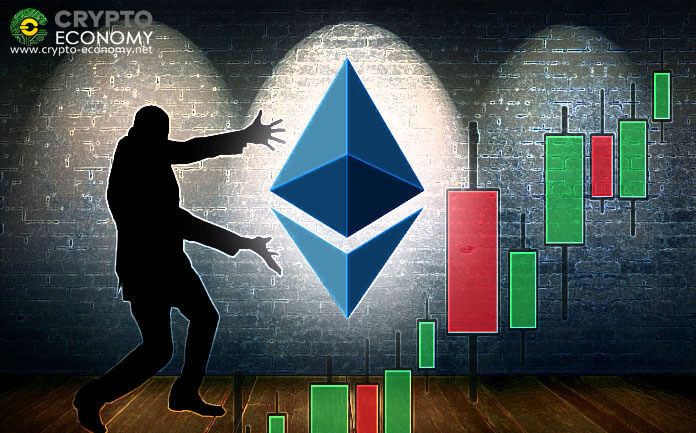 Is the altcoin season back? It looks like it given the rather encouraging inversion in the last two days. Largely interpreted as bullish by bag holders, it could be altcoins’ turn to march.

While Bitcoin is still regarded as the crypto king, dominating the market cap share, it is the reinvigoration of competing digital assets as XRP, LTC and now ETH that is pumping investors’ and traders’ expectation.

At the time of press for example, not only is ETH trading above $200, but the stagnation-and even a slip of BTC bulls, is perhaps a good sign, painting a beautiful picture of what lays ahead.

Behind this trigger could be a couple of fundamental reasons. One of them is the run-up to the Istanbul hard fork, the second stage of Constantinople where six EIPs will be activated. Then, secondly, it has to be the liquidity ramp following the announcement by the world’s largest crypto payment processor, BitPay, that it would support ETH payment.

Overly bullish, ETH prices have since responded positively, edging higher in the last 48 hours. Noted by Vitalik Buterin, the co-founder of Ethereum and the research leader behind Casper FFG, the decision, in his view, shows how Ethereum as a whole could be shaping, highlighting how cryptocurrencies can be applied in solving real-world uses. 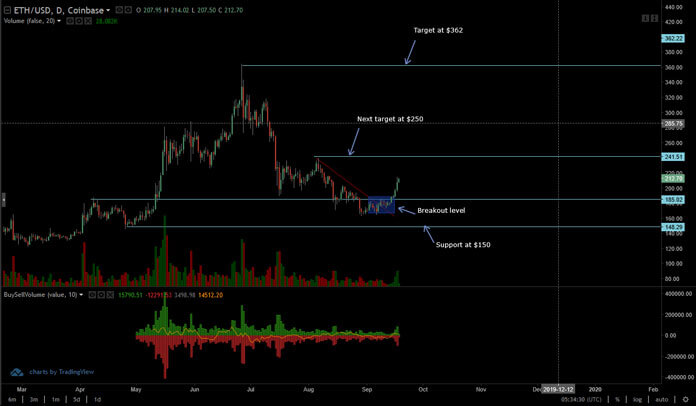 With most technical indicators flashing buy, it is evident from the chart that ETH bulls are back. In the last week, the second most valuable coin is not only trending above a key resistance zone, breaking above this liquidation zone but behind this liftoff is an uptick of trading volumes. This is a very positive hint that tows well with previous ETH/USD price analysis.

Accompanying this acceleration of price-and confirming buyers, is yesterday’s bull bar which had high trading volumes-$145k, exceeding those of Aug 28 bear bar-$115k according to data drawn from Coinbase. Further, note that bull bars of the last few days have been banding along the upper Bollinger Band (BB) meaning that the underlying bull momentum is strong.

Because of this, there is a window for risk-off traders to buy the dips with fitting a stop-loss order just below $180-$190 support zone.

In that case-and guided by the standard 1:3 risk-reward ratio, the first profit target would be $250 and later $360 as ETH bulls flow back in a trend continuation phase.

0
Ethereum (ETH) has continued to drop since its much-hyped upgrade, the merge,  transitioning from Proof-of-Work (PoW) to Proof-of-Stake (PoS). The software upgrade has clearly...
Read more
Price Prediction

0
‌It has been announced that Binance has launched a Global Law Enforcement Training Program. For the first time in the industry, this program has...
Read more
- Advertisment -
Posting....
We use cookies to ensure that we give you the best experience on our website. If you continue to use this site we will assume that you are happy with it.OkPrivacy policy