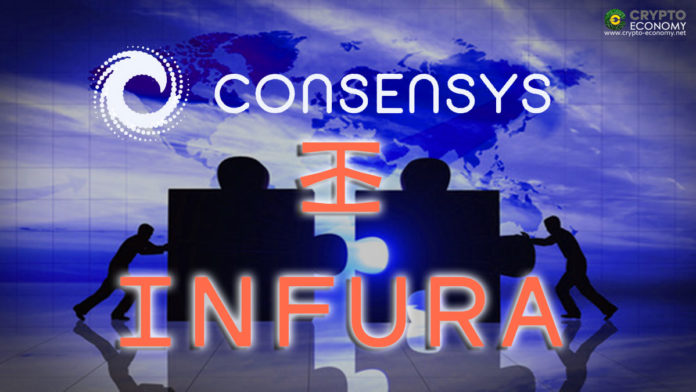 Ethereum’s leading development studio ConsenSys has acquired critical Ethereum infrastructure provider Infura according to a blog post published by the company this week.

So far ConsenSys has been supporting Infura through grants and donations which managed to keep the startup afloat over the past three years despite the rough market conditions most notably the 2016 DAO hack and the temporary network spike that was caused by the Ethereum dApp CryptoKitties back in 2017.

Infura will now be a fully owned subsidiary of ConsenSys meaning that it has joined the ConsenSys group which includes several other Ethereum ecosystem developers and applications.

Infura’s flagship offering is an API that allows developers on the Ethereum ecosystem to run their applications without hosting a node. Works similar to a hosting service but it merely connects these apps to the Amazon Web Services on which they are hosted. The CryptoKitties dApp mentioned above is a notable client on the Infura infrastructure and so is MetaMask, a leading Ethereum browser wallet expansion.

Infura claims to have had to fend off the interest of several tier 1 venture capitalists that wanted to acquire it and instead opting to go fully under the ConsenSys umbrella. The company states that it believes ConsenSys provides the best home in which to realize its vision.

“We believe that ConsenSys is the right place for us to be situated in order to realize our vision and continue to grow our offering.” In addition, during the negotiations for the acquisition, Infura claims to have negotiated hard to retain its culture and product vision. “Infura and ConsenSys bring the best developer tools to market,” the post added.