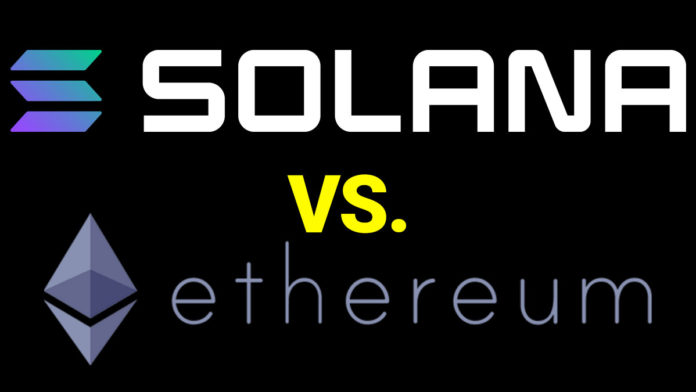 Solana is still showing promising signs of growth. It looks like outpacing Ethereum in some metrics and continuing to grow faster. One of the most important things in this blockchain is that the developer activity is rising on it.

More teams and companies are considering the Solana blockchain for building their applications but still are behind Ethereum. The food news for Solana is that the pace is slowing in the Ethereum blockchain.

According to a threaded tweet by Jeffrey Zheng, Ethereum is still the leader in terms of developer activity. But it looks like the pace is slowing down in the leader of the smart contract sector. Solana has been very attractive for developers in the past months, and it seems the community is growing very well.

The interesting fact is that comparing two blockchains like Ethereum and Solana may be like comparing nations. Jeffrey says:

“ETH vs. SOL. It probably won’t be a winner-take-all scenario. Each blockchain will likely evolve like nations — finding particular use-cases best suited to their comparative advantages.”

There are many reasons why Solana is seeing growth in developer activity while we see a downtrend in the Ethereum chart for this metric. Solana is a younger blockchain, and many new developers prefer to be part of its community. On the other hand, Ethereum is somehow matured, and some developers may not be interested in being in this kind of project. They like to test and grow the community they work in.

High gas fees in Ethereum are always a challenge for developers building dApps on this blockchain. It’s the reason we see many developers launch their dApps on alternatives like Solana. Besides, the team behind Solana is more active than the Ethereum teams in supporting new developers. All of these may have resulted in faster growth for developer activity on Solana compared to Ethereum.

There is a metric in favor of Ethereum when compared with Solana. The revenue in the former is a lot more than it in the latter blockchain. The cumulative revenue for Ethereum is $8.8bn while it sits at the $16.4m lines for Solana. But we know everything can change in the future if Solana continues to grow even with the current pace.

0
It has been announced that the Helium community has voted to migrate to Solana, according to a recent vote on Heliumvote. A recent poll indicated...
Read more
CryptoCurrency News