Democracy Earth: blockchain at the service of effective democracy 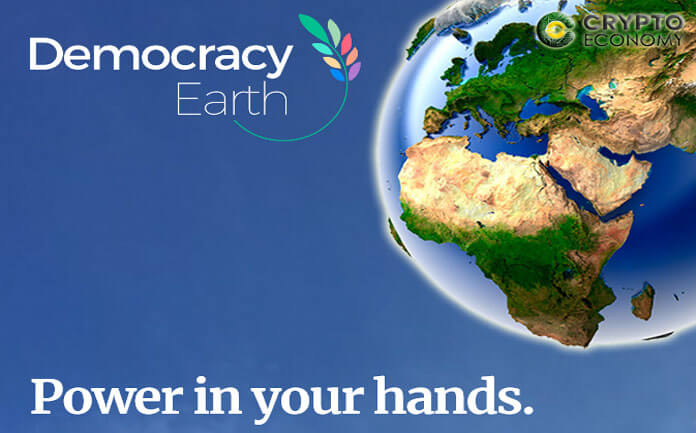 Climate change, the unequal distribution of opportunities, terrorism and forced migration are the product of misguided policies and confrontation between national governments. Taking in mind these scenarios and the success achieved in the globalization of financial assets there are organizations that bet on the construction of new models of democratic governance that allow humanity to collaborate and address pressing global problems. Democracy Earth Foundation is one of them.

The Democracy Earth Foundation is developing free open source software for decision making (voting) based on incorruptible blockchain, which can be used both in large and smaller institutions, from the most local involving two people to the most global involving all of us.

The Democracy Earth Foundation considers that the technology stack that includes Bitcoin as programmable money without Central Banks, and Ethereum (which allows for intelligent contracts without the need for Judicial Courts), requires a new layer that signals incorruptible votes beyond the territorial limits of the Nation-states.

The “sovereign” platform of the Democracy Earth Foundation is a decentralized government protocol that allows decision making of “liquid” democracy.

Thanks to the rise of open source software and peer to peer networks, political intermediation is no longer necessary. The Democracy Earth Foundation is building Sovereign, a decentralized and open source democratic governance protocol for any type of organization. They also announced they would launch their own ERC20 token, called the $ VOTE.

“We decided to reverse the traditional logic of starting with a token offer and then working only on the product. Instead, we are launching both simultaneously so that everyone can use their tokens immediately, from the first day, with a great user experience, “ Santiago Siri, co-founder and CEO of Democracy Earth, said recently.

The platform model of Democracy Earth was developed with a community of more than 1400 test users, several pilot programs and use cases around the world, with this users will have an experience similar to that of Twitter that also benefits from the properties resistant to censorship of blockchain networks.

The main objective of Democracy Earth is to make the software as democratic as possible, allowing blockchain networks to serve society with political signage for a variety of tokens. The next releases will eliminate the costs of casting a vote by allowing users to bet, or HODL, their tokens over political positions.

Any token of this platform can be used for political signage. For now, the possession of tokens is a silent signal, since most of the cryptographic assets serve a financial or exchange purpose. By allowing anyone to bet their tokens in political positions, tenure can become a strong voice in explicit support of an idea in political instruments.

Democracy Earth keeps its eyes on the horizon by virtue of building a global democracy among equals over the blockchain networks.

To know more details about this platform we recommend checking their Paper Democracy, and joining at their Telegram channel.

0
One of the most significant reasons for the increasing popularity of blockchain technology is its decentralization. Blockchain technology or Distributed Ledger is used to...
Read more
- Advertisment -
Posting....
We use cookies to ensure that we give you the best experience on our website. If you continue to use this site we will assume that you are happy with it.OkPrivacy policy