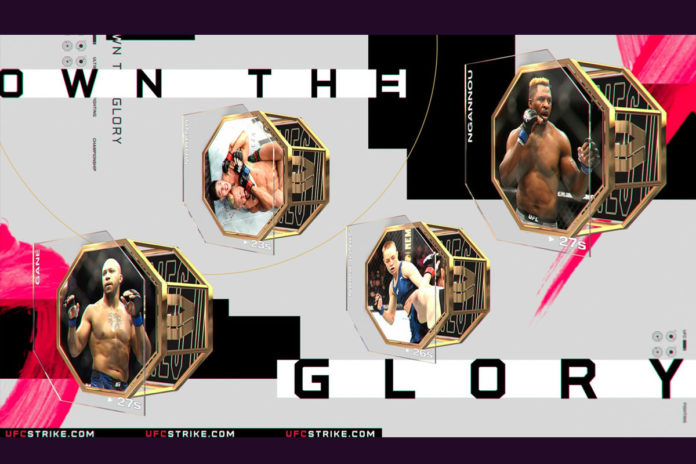 UFC Strike is the name of a new NFT pack launched by Dapper Labs in partnership with the UFC organization. In a joint announcement today, the UFC, the world’s premier mixed martial arts organization, and Dapper Labs, the creators of NBA Top Shot and NFL ALL DAY, announced the official debut of UFC Strike, a highly anticipated new NFT collectible product.

Starting on Sunday, January 23, the all-new collectible experience will be offered to fans, allowing them to take home some of the most memorable and talked-about fight moments in the history of the Ultimate Fighting Championship (UFC).

UFC Strike will begin with the first round of 100,000 “Fully Loaded” packs, which will contain three NFT Moments capturing incredible finishes and amazing displays of striking and grappling from UFC fighters such as Francis Ngannou, Amanda Nunes, Kamaru Usman, Rose Namajunas, Derrick Lewis, Justin Gaethje, and others.

The second round of 100,000 “Fully Loaded” packs will consist of three NFT Moments capturing incredible finishes and amazing displays of In addition to the best action clips from numerous camera perspectives, announcer commentary and crowd response from actual fights — a Dapper Labs first – will be included in these NFT Moments to further enhance the overall experience.

Each piece in the UFC Strike Moment NFT pack is designed to document, memorialize, and celebrate a single instance in UFC history through the use of high-quality audio and video recordings.

Visit ufcstrike.com to enter the queue for a chance to purchase a pack (while supplies last) for $50.00 USD. To access the initial open drop, fans must first register on the website. Additional drops will be made available in UFC Strike as the game continues to develop in the coming months, and they will be timed to coincide with the UFC event calendar. A peer-to-peer marketplace enabling fans to interact, purchase, and sell their Moments will be among the extra features included in the new platform.

Caty Tedman, Head of Partnerships at Dapper Labs, said about the release of this NFT pack:

“Dapper Labs has accelerated the move to Web3 by building new apps and platforms that enable great user experiences for millions of fans. Partnering with UFC, one of the fastest-growing sports in the world with a global fan base of more than 625 million people, is the next step to bringing even more into experiencing the benefits of decentralization while also delivering a meaningful experience for die-hard UFC fans to collect and own the moments that matter to them.”

0
There is a study from Market Decipher that suggests that the Sports NFT market grew at a compound annual growth rate (CAGR) of 36.3%...
Read more
- Advertisment -
Posting....
We use cookies to ensure that we give you the best experience on our website. If you continue to use this site we will assume that you are happy with it.OkPrivacy policy