Confusion? Petrodollar rallies towards the sky following the “Petro” announcement. 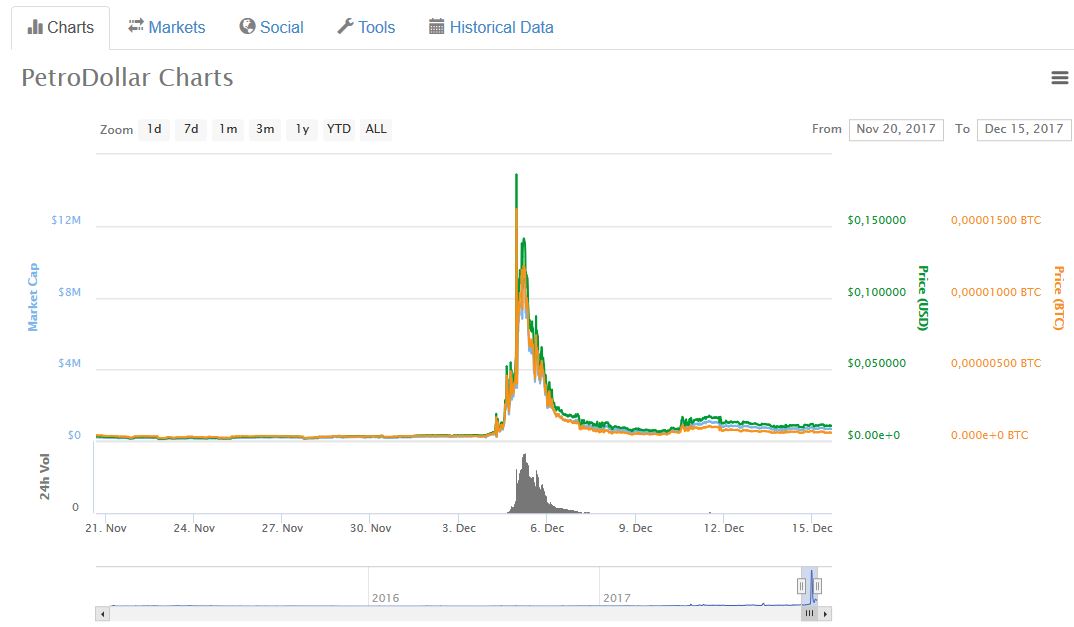 A cryptocurrency known as PetroDollar, has just recorded an increase of +2000% in just 24 hours, coincidentally, following an announcement issued by Venezuela’s president, Nicolás Maduro, about the creation of a cryptocurrency supported by that country’s oil reserves, and going by the name of “Petro”.

According to data collected from CoinMarketCap, the aforementioned lucky virtual coin that went all this time under a shadow, with a market cap that was waving between $ 80,000 and $ 200,000, landed a new All-Time High this December 5, breaking through its previous highest barrier and reaching a total cap of $11,905,948 in a specific moment of such impressive rally. Yet, at press time, its market cap is going down and reaching a total of $ 3,862,237.

What’s curious about this case is that the high peak is reached by a cryptocurrency that has almost nothing to do with that of the Venezuelan government (just matching, partially, in the name and objective), which still has no release date, while the PetroDollar is active on the market since 2014.

By comparing activity time with that of the announcement, one can find that the Venezuelan president gave the news at 19:30 UTC. Three hours later, at 22:30 UTC, the lucky cryptocurrency started engines and gas its way towards the mountain for the first time.

From the readings of movements achieved in the last 48 hours, it can be inferred that there’s a misunderstanding among the people who missed “Petro” with “PetroDollar”, which explains how a virtual currency that was quiet all this time (it doesn’t even have an official, active website, besides its official thread at BitcoinTalk), went to move high volumes of money in less than two days. In fact, in the aforementioned thread, users are still commenting on the movement it had at exchange Cryptopia, just after the news.

Extending to other Venezuelan cryptocurrency

The PetroDollar is not the only cryptocurrency profiting from this misinformation. Another Venezuelan digital currency, Bolivarcoin, is currently recording high values in its market cap, managing to reach pass $ 500,000, and quoting an exchange rate of $ 0.05 per coin, when it was struggling to barely pass $ 0.02, in a similar scenario of that of the XPD (PetroDollar’s Token). In other words, it’s possible that another misunderstanding between the Petro and the Bolivar coin is causing a pumping in the latter. Curiously, OnixCoin (another Venezuelan cryptocurrency, and the most successful of these), has seen no benefit from all this confusion.