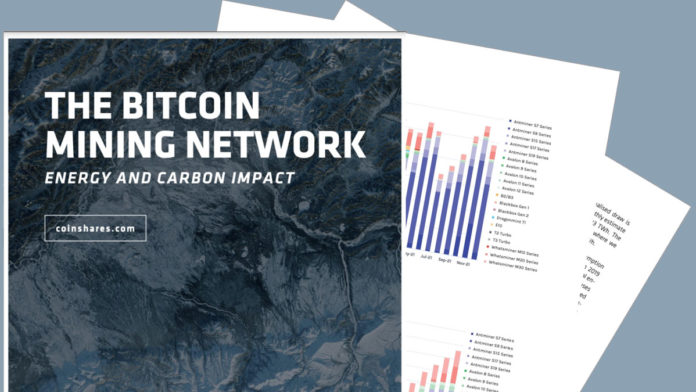 The Bitcoin mining industry and its environmental implications are discussed and analyzed in new research produced by CoinShares. The public can now download it from the official website.

Since its inception, there have been discussions over Bitcoin’s energy use and indirect environmental impact. It has become a reoccurring topic that tends to resurface in full force with each market cycle.

Concerns over ESG (Environmental, Social, and Governance) began to grow last year, prompting CoinShares Research to construct a complete model to estimate emissions and a unique data collection method to populate it.

The new study summarizes the model’s overall findings, provides an overview of patterns and trends and includes a brief section on the use and cost of carbon credits to offset emissions.

The model’s overall purpose is to quantify the carbon emissions generated indirectly by the Bitcoin mining network. These emissions are indirect since there appears to be a widespread misconception that Bitcoin requires emissions to function. However, Bitcoin, like electric automobiles, is only as green as the electricity it consumes, implying that Bitcoin would be completely renewable in a 100% renewable energy scenario be entirely reliant on renewable energy.

The report’s findings highlight a number of broad themes. Some are predictable, while others are unexpected. Older mining units, for example, are gradually being moved out of the network in favor of newer, more efficient ones. As a result, the efficiency of network power is improving with time. 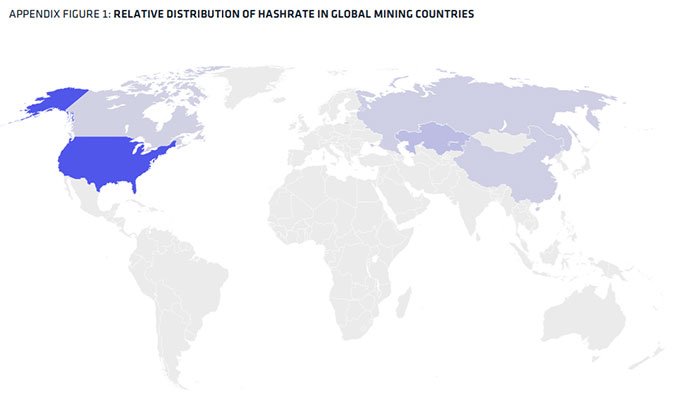 According to the analysis, emissions from Bitcoin miners’ power generation are unequally spread around the world, with a small number of regions producing the majority of emissions. The following is from the report:

“The largest single current emitter is the United States which produces 47% of CO2 emissions. In second and third place we find Kazakhstan (22%) and Russia, respectively. Inside of these countries, certain regions are also outsized contributors such as Kentucky (the USA, 15%), Georgia (the USA, 6.4%), Nebraska (the USA, 5.7%), Texas (the USA, 5.6%), and the Siberian Federal Grid District (RUS, 8.1%).”

What is the environmental impact of Bitcoin mining?

In its analysis, CoinShares claims that the environmental impact of Bitcoin mining is overblown. In the broad scheme of things, carbon emissions are insignificant.

The emissions emitted by electrical suppliers who supply the Bitcoin mining network are insignificant. Removing all mining emissions would save 0.08 percent of world CO2 emissions.

It would be nothing more than a rounding error to isolate the network from global demand, robbing hundreds of millions of people of their sole hope for a fair and accessible form of money.

0
It has been claimed that Bitcoin has a greater impact on the environment than gold, according to researchers from nature.com.  Climate Effects are Still Worrying According...
Read more
Bitcoin News

0
This cryptocurrency lending platform, Maple, has established a $300 million credit fund for Bitcoin miners, charging rates on their loans that can be as...
Read more
CryptoNews

0
In a recent report, the White House released an assessment of the environmental impact of crypto mining. There are several measures that are recommended...
Read more
Companies

0
The financial results for the second quarter of 2018 ended on 30 June 2022, have been announced by CoinShares International Limited. A comment from Jean-Marie...
Read more
CryptoCurrency News