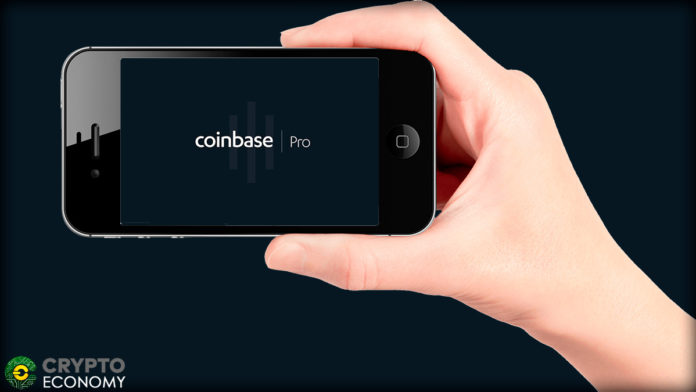 Popular US-based cryptocurrency exchange Coinbase has released a new mobile trading application for users of its professional-focused trading platform Coinbase Pro. The exchange made the announcement on Thursday in which it revealed that at launch time the only version available can be downloaded through the Apple App Store, however, there are plans to launch the equivalent Android application. The new application will be an addition to the Coinbase Pro desktop application that the platform’s users have available on top of the web interface.

Since the launch of Coinbase Pro on desktop, few features have been requested more than a mobile trading experience. That’s because, until now, our customers have had to make a choice: usability or mobility.

Coinbase claims that with the newly launched Pro mobile application, the exchange has changed this by “offering the most intuitive feature set of any mobile crypto trading platform.” The application offers more or less the same trading experience as using the platform on the desktop application including having access to real-time candles, depth charts, order books, and advanced order types, along with intuitive shortcuts. All these are fancy features normally reserved for desktop and web application interfaces but not mobile applications which usually are limited by the screen real estate.

All the features have been re-thought and rebuilt in a way that makes them not only usable but useful.

It is worth noting that the Coinbase Pro and the consumer-facing Coinbase.com platforms are different products. Coinbase.com has a mobile application for its users that allows them to conduct basic functions such as create accounts, purchase and sell cryptocurrency and access their funds held by Coinbase. It is a custodial wallet application available on both Android and iOS platforms. However, the Coinbase Pro platform is geared towards the more advanced users that appreciate the availability of complex trading features.

Coinbase wrote on the notification:

Like traditional capital markets, crypto trades 24/7. Opportunities to buy and sell present themselves at all hours of the day. This means it’s critical for the sophisticated crypto traders that Coinbase Pro serves to have access to the tools and information they need to capitalize on these moments when and where they need it.

Coinbase recently revised the trading fees for trades on the Pro platform below the value of $10,000. Initially, the exchange charged a maker fee of 0.15% and the takers were paying as little as 0.25%. However, these figures were revised to a new rate that took effect starting October 7th. The maker fees were hiked by a massive 233% to 0.5% while the taker fees were matched representing a hike of 100%. Coinbase claimed that the new fee structure was “designed to increase the depth and liquidity of our markets.”