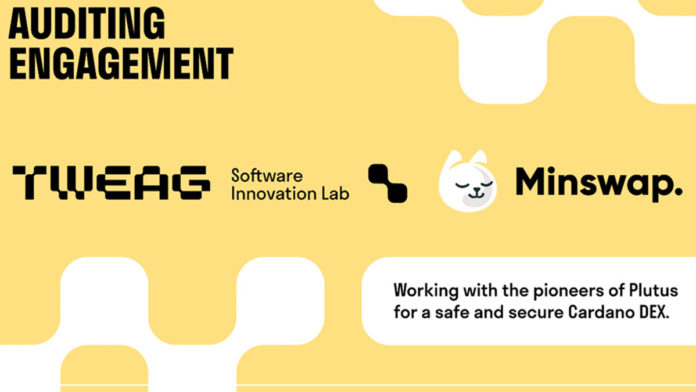 Minswap announced an audit to be done by Tweag on this DEX to check the security and reliability of its smart contract. It can be a significant step for this Cardano-based DEX to become a reliable option for those who are looking for decentralized financial services on this blockchain. Minswap will launch soon but decided to have the external security audit before launch to ease the mind of future users.

The main thing to be audited by Tweag is Minswap’s smart contract. It can the considered as the heart of the DEX that powers the platform and provides necessary services. Tweag is one of the well-known teams in the Cardano community with considerable contributions in developing smart contract services on this blockchain. This software innovation lab specializes in Haskell development. It had worked closely with IOHK to develop Plutus, Cardano’s smart contract platform.

The audit process on Minswap includes manual analyzing the code of its smart contract. Tweag will analyze the code to find potential problems that may affect the security of this DEX. Applying lightweight formal methods for testing the smart contract is part of the audition. The ultimate goal is to make sure all the components are designed and implemented successfully, and bugs are eliminated in a transparent way.

Minswap team believes Tweag can offer a reliable audit on their platform. The announcement says:

“While the rollout of Smart Contract-powered dApps such as Minswap approaches, we cannot stress enough the importance of a strong, secure, and validated code base. We are confident in choosing Tweag for this task, given their work on Plutus alongside IOHK has rendered them defacto domain experts of Plutus as a platform.”

Tweag’s team includes many experts in the smart contract security field and has considerable experience in auditing decentralized platforms. DeFi protocol Indigo is one of the protocols audited by this team.

Minswap is one of many DEXs being developed and launched on Cardano. It works like other DEXs, offering swaps and exchanges in a decentralized way and paying fees to liquidity providers. The competition for becoming the biggest DEX on Cardano is heating up. This blockchain can become the next destination for users who are looking for decentralized services with higher speeds and lower costs. But it’s still soon to predict which DEX will be more successful on Cardano. Maybe decisions like being audited before launch can help DEXs like Minswap. But there are still many factors to consider when analyzing their success.

0
After Jerome Powell sparked a sell-off in risk assets, Bitcoin (BTC), lost some of its recovered grounds as the digital token declined below the...
Read more
- Advertisment -
Posting....
We use cookies to ensure that we give you the best experience on our website. If you continue to use this site we will assume that you are happy with it.OkPrivacy policy