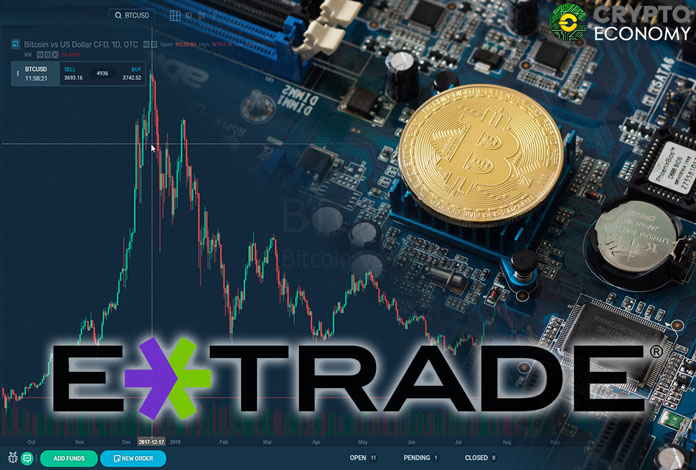 Crypto adoption is on the rise following rumors that popular online brokerage firm TD Ameritrade was testing out trades of both Bitcoin and Litecoin on NASDAQ platform. On the heels of this news, reports have emerged that TD Ameritrade’s New York-based counterpart E*TRADE Financial Corp, one of the biggest online trading brokerage platforms is gearing up to launch trades for Bitcoin and Ethereum cryptocurrencies. Speaking to Bloomberg, an official familiar with the matter said that E*TRADE is getting ready to enable cryptocurrency trades for its 4.9 million brokerage accounts.

This news has also been corroborated by New York Times resident cryptocurrency and Fintech specialist Nathaniel Popper. Popper wrote on his Twitter page on Friday that:

In the wake of TD Ameritrade quietly opening Bitcoin trading for some of its customers, I was just told that eTrade is preparing to begin offering both Bitcoin and Ether trading to its 5 million or so customers and is just finalizing a third party to actually hold the coins.

According to Popper’s contacts, it seems the only hold up to E*TRADE launching cryptocurrency trades is the ‘small’ matter of custody.

To put the news into perspective, once E*TRADE enables cryptocurrency trades, this could boost the adoption of cryptocurrency by a noticeable margin. According to documents filed by the company with the US securities regulatory agency SEC on December 31st, 2018, the company reported margin receivables of $9.6 billion and total assets well over $65 billion. In terms of online brokerage firms, E*TRADE is a giant and once it enables trading of Bitcoin and Ethereum, its account holders will have access to the volatile assets. It is hard to underestimate the effects of such as development.

According to the Bloomberg report, it seems that E*TRADE will launch its trading with Bitcoin and Ethereum with possible additions of other digital assets at a later time. Similarly, TD Ameritrade has been reported to be testing paper trades for Bitcoin and Litecoin. Once the trading of these assets has been enabled on the live platform, it is expected that more assets will be added.

0
Law enforcement authorities in Tokyo have arrested two person accused of stealing bitcoin worth a total of around 78 million yen from the trading...
Read more
Bitcoin News

0
The cryptocurrency derivatives market is booming right now and if you are watching the markets you may have noticed a trend in which institutions...
Read more
Price Analysis

Bitcoin [BTC] Price Analysis: Bitcoin Prices Cool off, Retesting the 20-day MA, but is $7,500 on the Table?

0
Apparently, Bitcoin halving, as seismic as it promises to be and set for early May 2020, fails to leave crypto and BTC forums for...
Read more
Bitcoin News

0
Bitcoin’s second layer scaling solution Lightning Network has always been an enigma for most users, criticized for being “too hard” to use for the...
Read more
CryptoNews

0
Cryptocurrencies such as Bitcoin are not banned in India. These are the sentiments of the Reserve Bank of India (RBI), which is the country’s...
Read more
Price Analysis

0
Crypto development is like a treadmill and overly, it is a net positive for the community. Thus far, development in Ethereum is steady, and...
Read more
- Advertisment -
We use cookies to ensure that we give you the best experience on our website. If you continue to use this site we will assume that you are happy with it.OkPrivacy policy