Applications based on blockchain technology continue to grow, and that trend will not stop. Blockstack, an interesting start up based in New York, is a bitcoin browser based blockchain that aims to create a new decentralized Internet. As everyone knows, or at least many, both information and data on the Internet are neither owned nor controlled by users or customers, but in fact belong to large corporations that facilitate access to the Internet. The same applies to mobile applications because the data is stored in the application and therefore belongs to the creator of the application. Applications can also sometimes override or ignore the limitations set by the user and have access to more than the user would want.

Along with the issue of privacy, today’s Internet is not exactly secure since the data is stored on large servers that if infiltrated compromise the security of all data stored in them. On the other hand it is also a reality that certification authorities are not always reliable.

These are inadequacies in today’s Internet that Blockstack seeks to remedy. “Data storage is simple and reliable and uses the existing infrastructure in the cloud. Users connect with their Dropbox, Google Drive, etc. and the data is synchronized from their local device to the cloud. When users connect to applications, they are anonymous by default and use an application-specific key, but their complete identity can be revealed and demonstrated in the user interface and uses the block chain for secure management of keys, devices, and user names. Any time.The keys are for signature and encryption and can be changed as devices need to be added or removed. “Explains the Blockstack people.

This will be achieved by simply downloading and installing the Blockstack browser. The technology is open source, however, the recent announcement has created the possibility for developers to innovate more in it. 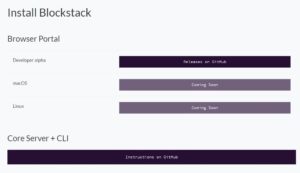 The Blockstack browser in this developer version allows them worldwide to access a new Internet. This new Internet changes the dynamics and gives power back to the people. Developers can create applications on this new Internet by downloading the Mac application from Blockstack or Linux (Windows soon) and using nothing more than existing browsers like Chrome or Safari or Firefox.