Home Tutorials Bitcoin ETF: Everything you need to know.
FeaturedTutorials

Bitcoin ETF: Everything you need to know. 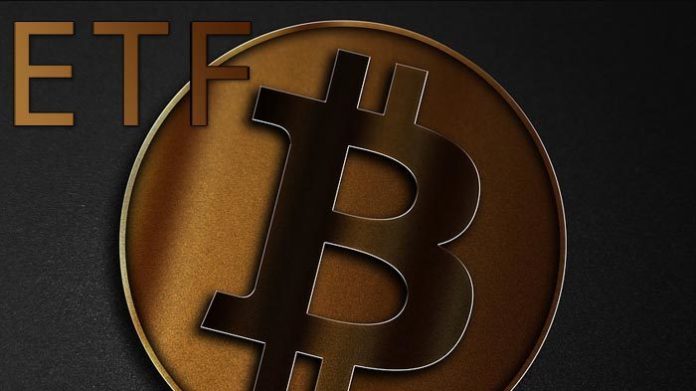 Bitcoin ETF is one of the buzz phrases that have taken the cryptocurrency and financial world by storm. Whether you are an established crypto investor, a newbie, or someone just taking a genuine interest, you are bound to meet the concept of Bitcoin ETF for an especially good reason.

Bitcoin ETF represents the cryptocurrency world’s mini-Messiah to lead the world of crypto into mainstream investment, expected to inevitably bring an influx of investors and subsequent billions of Dollars to the crypto market.

Browse through the recent news and you will realise that any news concerning a Bitcoin ETF has a potential effect on the cryptocurrency’s market price.

It is now common knowledge that anything that indicates diminished possibilities for a future Bitcoin ETF is followed by a negative result on the crypto market as it has a direct bearing on investors’ willingness.

But what exactly is a Bitcoin ETF? What does it mean to the cryptocurrency in general? And how has the brilliant idea been handled by the responsible authorities over the years?

This article will explore the answers to these questions and weigh to see if the promised future attached to the Bitcoin ETF holds any plausible ground.

Before plunging into the Bitcoin ETF talk, let’s start with the basics by looking at the Exchange Trade Fund/ETF.

An ETF refers to a type of investment fund which allows shareholders of the fund to indirectly own the assets under its ownership.

The fund has the following key characteristics:

– It owns specific assets such as oil, gold, basket of stocks etcetera.

– It tracks a specific asset Index such as a stock or bond index.

Why do they matter?

ETF’s have long been recognized as the most preferred exchange trade product for three good reasons.

These colossal advantages have been witnessed by the remarkable influx of investors into US ETF’s since their inception in 1993.

The US ETF market displayed a stunning growth rate since their inception by accommodating over $2 trillion dollars’ worth of investments within the period between 1993 and 2015.

What is Bitcoin ETF?

In simple terms, upon establishment, a Bitcoin ETF would be an ETF, with all the defining features, but with a sole focus on Bitcoin, the digital currency.

In this case, when an investor is buying a Bitcoin ETF, he/she would be indirectly buying Bitcoin since the ETF owns Bitcoin as an underlying asset.

The ETF will essentially assume the responsibility of tracking the price of Bitcoin.

In essence, the Bitcoin ETF would allow the investor to have access to a regulated vehicle of investment which they can use to trade on well-established exchanges.

How can an ETF affect Bitcoin?

Experts and crypto enthusiasts have rightly predicted a transformative effect that a Bitcoin ETF would have on Bitcoin and the whole cryptocurrency space.

The coming of the ETF would come with an extremely easy way of investing in the cryptocurrency.

This would inevitably open doors for robust investments from such sources as mutual funds, pension funds, private banks and multiple individual investors.

The immense capital inflow, if it happens, will then lead to a Bitcoin bull run such as was never witnessed before, even greater than last year’s famous all-time high.

The SEC and Bitcoin ETF

A Bitcoin ETF wouldn’t miss out on a medal recognizing some of the greatest and brightest ideas in the 21st century financial industry, but like most great ideas it can’t just hit the ground without a checkpoint.

This is absolutely necessary as it’s a step that makes sure all the potential foreseeable flaws are spotted and corrected beforehand thus saving the unsuspecting investors from spending a fortune on a flop.

A Bitcoin ETF, as was first proposed in 2013, had its concerns which have probably been the only reason why eager investors are still waiting, 5 years down the line.

The US Securities Exchange Commission has been a dominant force and almost synonymous with the history of the Bitcoin ETF. Let’s have a few moments of consideration on the regulatory body.

What is the SEC?

In layman’s terms, the SEC takes the role of a watchdog responsible for keeping sanity in the US’s investments world, especially securities.

In white collar terms, it is described as an independent agency tasked with federal laws enforcements, proposition of securities rules, regulation of the securities industry and other financial organizations including electronic securities markets.

The agencies mission is described in three main aspects as expressed on its website:

When it comes to Bitcoin ETF’s, the agency hasn’t lived any short of its duties as it has always brought up the most important and pressing questions to every single Bitcoin ETF proposition.

To date, no ETF proposal has successfully proved worthy of any green light from the regulatory body.

Why has the SEC delayed the Bitcoin ETF decision?

To date, it seems that there is still yet a Bitcoin ETF proposal that has convinced the SEC based on the five qualities that the regulatory authority look out for.

According to the SEC’s report on concerns of Bitcoin ETF’s in January, ETF’s have unresolved issues with possible manipulations, price volatility, Liquidity, Custody and valuation.

In short, to date, no one has been able to convince the SEC of an ETF that ensures that the five key parts of its mission, which are investor protection, fairness, order, efficiency and capital formation, are well taken care of to a satisfactory level.

Having considered some of the essentials to do with the Bitcoin ETF, let us now look at how the road has been like so far.

With the advent of futures markets, over 20 Bitcoin ETF proposals with different fates have emerged over the past 3-4 years.

While some are still in the race and seeing some success, some have been met with denials from the SEC whereas some couldn’t endure the long wait and obstacles and pulled out to withdraw from the bandwagon.

The history of ETF cannot be complete without mentioning The Winklevoss Twins, Cameron and Tyler.

The Winklevoss’ first Bitcoin ETF proposal represent the first and solitary effort to make the idea a reality.

The application was filed in 2013 and was quickly met with an SEC snub due to concerns relating to the unregulated and volatile nature of cryptocurrencies.

The ETF went through several modifications in an attempt to live up to SEC’s standards.

2014 saw the brothers introducing Winkdex as a new tracking Index for the ETF amid concerns with the unreliability of the previous method.

Subsequent improvements were seen through 2015 and 2017 where the idea was rejected again when the ETF was proposed through the Bats BZX exchange.

Following this, the idea was dealt another blow this year on July 26 when the SEC made a unanimous decision after voting the idea down.

The VanEck and Solidx Proposal Bitcoin ETF and others

Out of a myriad proposals filed by the SEC, the VanEck and Solidx Bitcoin ETF proposal is perhaps the most promising, following SEC’S rather favorable decision to postpone any course of action to 30th September, 2018.

The decision came in after the VaNEck Cboe BZX Exchange filed a proposed rule change on June 20 and after the firms had also presented the changes made to address problems which were identified when the SEC rejected a previous attempt by Solidx to establish a Solidx Bitcoin Trust.

The solidx Bitcoin trust was rejected earlier on in March 2017 after the NYSE Arca filed for a proposed rule change.

The decision to delay any course of action has been received with much optimism by the crypto community at large as it is largely seen as a positive response to the changes that have been made and the overwhelming response displayed during the most recent comment round. 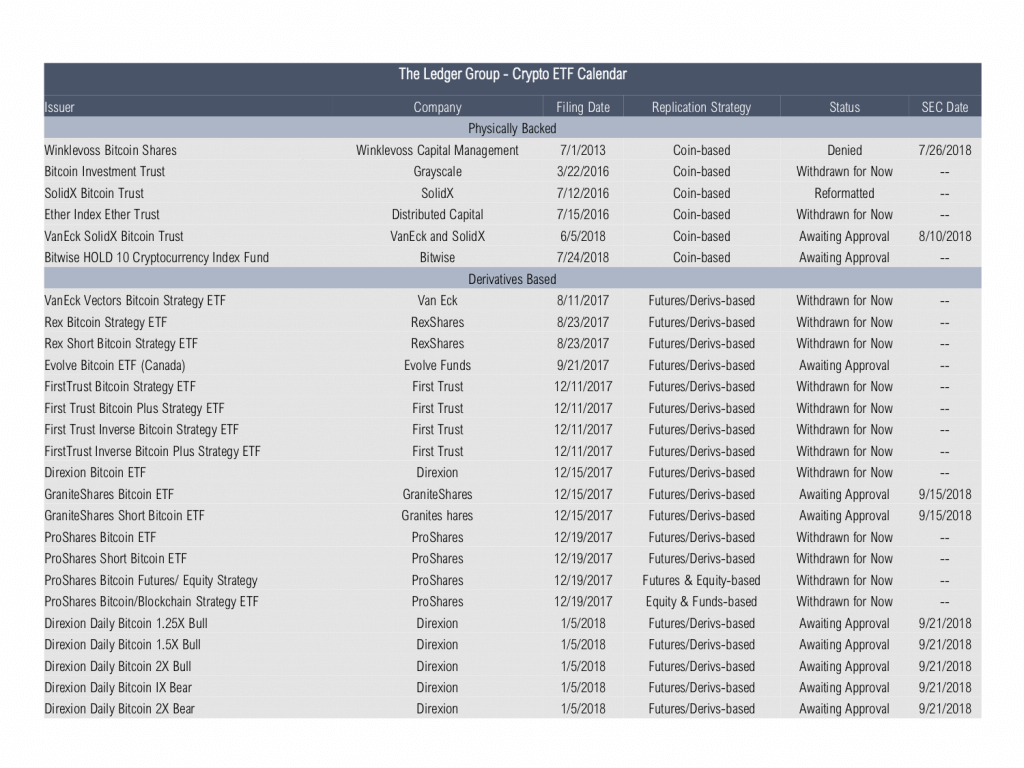 Currently, there are several Bitcoin ETF’s on pending status and an additional proposal which is more of a general cryptocurrency ETF.

The most promising ETF remains the CBOEx VanEck which is physically backed and whose deadline was extended to the 30th of September 2018.

The SEC communicates the rejection of the 9 Bitcoin ETFs that were pending so far, since they do not meet the necessary requirements:

“The Commission is disapproving this proposed rule change because it does not find the proposal to be consistent with Section 6 (b)(5) of the Exchange Act, which requires, among other things, that the rules of a national securities exchange be designed to prevent fraudulent and manipulative acts and practices” states the SEC.

The rejected ETFs have been those proposed by Direxion, GraniteShares and ProShares.

A bitcoin ETF will without doubt be a major milestone in the history of digital currencies.

The ETF is symbolic of the infiltration of cryptocurrencies influence into the mainstream financial sector while opening up new possibilities to both investors and financial institutions.

However, it remains for the Bitcoin ETF’s and cryptocurrencies in general to prove their reliability to the major regulatory authorities to get beyond the approval and reap the fruits thereof.

With just a few months, and perhaps weeks to go, time will soon unfold the future as it relates to the highly anticipated Bitcoin ETF.