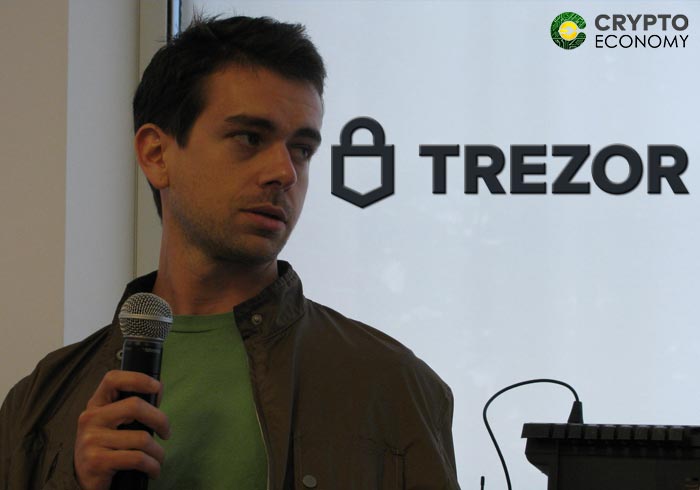 If anyone is bullish about the future of cryptocurrency and in particular Bitcoin it’s Jack Dorsey the CEO of social media giant Twitter and payments service Square. In the past several weeks he has been active in the blockchain space advocating for Bitcoin’s layer 2 scaling technology Lightning Network saying that his company Square will be integrating LN technology in the future.

Not wanting to stop at that, Jack is forecasting that the protracted bear market is about to hit bottom and therefore it’s time to load up on some crypto bags for the moon. He’s not just forecasting, he’s actually walking the talk. Last week, he announced that he will be purchasing, through Square’s Cash App, $10,000 worth of Bitcoin every single week. $10K is the limit for transactions on the CashApp.

On Friday 8th March, he revealed to his 4+ million followers on Twitter that he had purchased SatoshiLabs’ Trezor hardware wallet, a safe place to store his amounting stock of Bitcoin.

In his tweet, he revealed that he had bought the leading cryptocurrency wallet provider’s wallet through the CashApp but did not reveal which model of the wallet he acquired. He did, however, send a follow-up tweet that revealed that he spent 0.06639 BTC (an equivalent of $260). Based on this information it seems he purchased the Model T version with a few extras to go with.

It was interesting to his followers to know what made him chose the Trezor wallet over its competitor Ledger wallet. To this one follower tweeted saying:

“Ledger is great too, but it’s not fully open source.  Their firmware is not open source due to vendor NDAs.  As I understand it.”

A comment to which Jack replied with a simple affirmative response.

Defending its stance on the decision not to use open source code, Ledger tweeted Jack saying:

“Hello @jack and thank you for raising awareness about Bitcoin! The security model of hardware is quite complex, and offering open source firmware isn’t a silver bullet. We’ll provide more flavor during MIT Bitcoin expo https://mitbitcoinexpo.org on Sunday.”

Jack’s decision to purchase Trezor has greatly boosted the image of Trezor and SatoshiLabs, the manufacturer of the hardware wallet. Not to miss the opportunity to invite the newest member of the ‘family’, Trezor responded to Jack’s earlier tweet about purchasing one of their devices.

“We are proud to welcome you to the family, @Jack! Kudos for choosing open-source for your journey towards full digital sovereignty!”

It’s not just about accumulating Bitcoin for the upcoming bull season, but the purchase of the hardware wallet is a way to demonstrate good security hygiene when it comes to securing digital currencies. Anyone wanting to purchase digital assets should consider making an investment in a hardware wallet or paper wallet as these are some of the safest ways to secure funds.

0
The cryptocurrency market has struggled to find momentum and strength through the first half of this year. With the increasing correlation between crypto and...
Read more
Opinion

0
Web 5.0 aims to build an additional decentralized web that gives you full control over your data and identity and then empowers you to...
Read more
Price Analysis